What's ahead in wake of bankruptcy warning
Advertisement 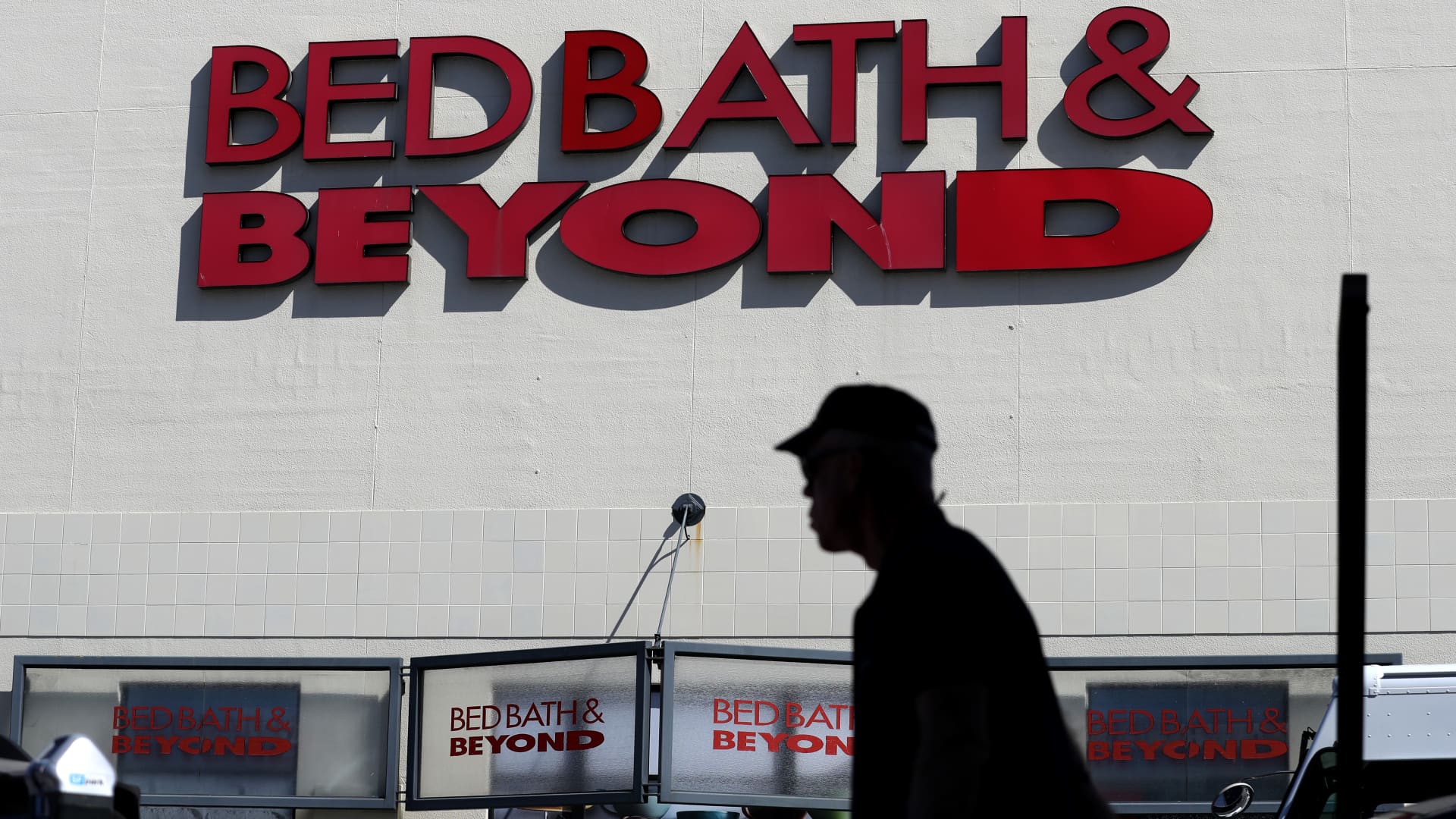 A pedestrian walks by a Bed Bath and Beyond store in San Francisco, California.

When Bed Bath & Beyond leaders speak to investors Tuesday morning, they won’t simply report sales and earnings results. They will have to address a stark reality: The cash-strapped home goods retailer is running out of time.

On Thursday, Bed Bath warned it may have to file for bankruptcy, saying that it could soon be unable to cover costs as sales lag and store traffic dwindles. It also said it’s struggling to keep items in stock, as it runs low on cash and works to remedy strained relationships with suppliers.

The nationwide chain, known for its 20% coupons and sky-high piles of towels and housewares, is increasingly at risk of joining the list of retailers that have shuttered stores and faded away. Think, Sears. Circuit City. RadioShack. Pier 1. Linens ‘n Things.

What’s more, the attempted turnaround comes at the same time that inflation weighs on consumers’ wallets and as the housing market gets hit by higher interest rates. Plus, after spending the earlier years of the pandemic at home, more people are choosing to spend money on dining out or booking trips rather than buying cookware, a duvet or throw pillows.

“When you have a shift in how consumers are allocating their spending, and a recession looming potentially on the horizon, it makes it much more of an uphill battle,” said Justin Kleber, senior research analyst at Baird Equity Research.

The company’s stock performance reflects its tough path forward, too. Shares of the company touched a 52-week low on Friday. As of early Monday, shares were trading around $1.74 for a market value of less than $151 million.

Bed Bath laid out its latest turnaround plan in August. The plan called for drastic cost cuts in the way of closing about 150 of its namesake stores and reducing its head count by about 20% across its corporate and supply chain workforce.

Those efforts have brought its operating costs down, as it tries to drive up sales: For the third quarter, Bed Bath expects operating expenses to be about $583.6 million, compared with about $698 million in the year-ago period, it said Thursday.

The company’s turnaround strategy also involved phasing out some of its private labels and bringing back more well-recognized national brands. It pledged in August to work with those national brands to develop exclusive items and to add items from direct-to-consumer brands — merchandise aimed at setting it apart and giving shoppers a reason to come back to its stores.

Come Tuesday, investors will want to hear if the company has improved its inventory levels, if they managed to secure any exclusive items for the holiday season and how willing vendors have been to work with the retailer. If Bed Bath has made significant inroads in improving inventory, it could offer a glimmer of hope for the quarters ahead.

“Being the first to bring new brands and products to our customer has always been one of our roles as a retailer,” Executive Vice President Mara Sirhal told investors during an Aug. 31 business update. “In the home market, there’re many D2C brands which bring their own compelling brand marketing and followers who know and want them but aren’t widely available to shop.”

Emerging direct-to-consumer brands have an incentive to partner with brick-and-mortar shops like Bed Bath and Target, as they offer a way to reach more customers and a reprieve from the e-commerce cooldown, steep marketing costs and consumer habit shifts that have cut into profitability since the Covid pandemic began to wane.

But brands and vendors have been hesitant to extend credit to Bed Bath as its mounting debt cast doubt over its ability to pay back bills.

The company said Thursday it expects net sales for the third quarter, which ended Nov. 26, to be about $1.26 billion — a nearly 33% drop from $1.88 billion it reported for the year-ago period. Bed Bath anticipates a net loss of about $385.8 million for the quarter, an approximately 40% jump in losses year over year. Those quarterly losses include an approximately $100 million impairment charge, which was not specified.

CEO Sue Gove urged patience on Thursday, saying the turnaround will take time. She took the helm after former CEO Mark Tritton was pushed out in June.

“Transforming an organization of our size and scale requires time, and we anticipate that each coming quarter will build on our progress,” she said in a news release.

Baird’s Kleber said investors will want to hear if there’s been a change in sales trends during the Christmas season — key weeks that would be reflected in fourth-quarter results, but could be previewed sooner.

Before Bed Bath can address moving product off shelves, though, it needs to tackle an even more fundamental problem: having enough merchandise to fill them.

The company is using dollars it earned during the holiday season to bulk up the shelves with help from its key vendors, Gove said. As in-stock levels have improved, so have sales trends, she said.

But it’s not clear if that will be enough.

“At the end of the day, all of the yabba dabba doo about their newly minted strategy that they were touting over the last six months. It’s all just a lot of talk,” said Mark Cohen, a professor and director of retail studies at Columbia Business School.

Cohen said he sees the going-concern warning as the “kiss of death” for Bed Bath, solidifying bankruptcy as the retailer’s only remaining option — beyond a savior swooping in with an infusion of cash or to buy a stake of the company.

“Without a defining event of that sort, this company is toast,” said Cohen, the former CEO of Sears Canada.