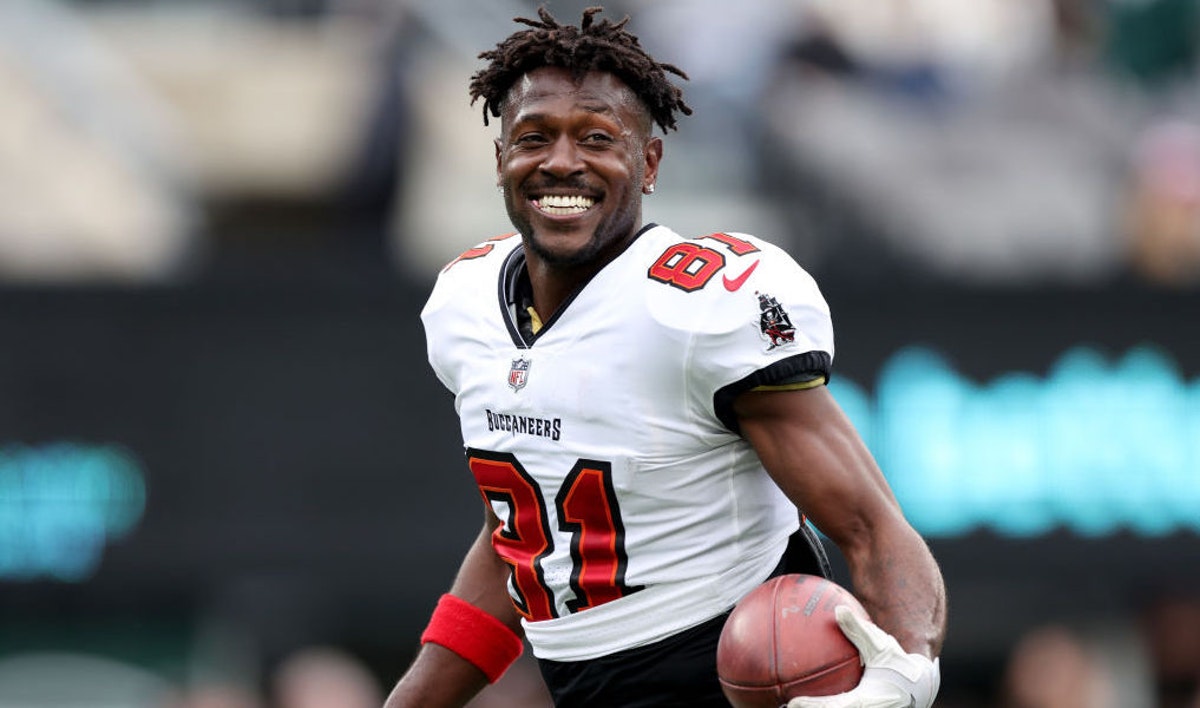 Our final look at Antonio Brown the football player may be of him shirtless, running off of the MetLife Stadium field.

In a bizarre scene in East Rutherford, New Jersey, the Tampa Bay Buccaneers wide receiver appeared to be upset on the Bucs sideline late in the third quarter against the New York Jets, taking off his shoulder pads and jersey before exiting the field shirtless.

A full view of Antonio Brown walking off the field while taking off his uniform.

The FOX NFL broadcast said that teammates Mike Evans and O.J. Howard attempted to calm Brown down before he began removing his uniform and exiting the field.

Video of Antonio Brown leaving the field after taking off his jersey and shirt and throw it into the stands. pic.twitter.com/1hwNYei5Fq

Brown has had a drama-filled career, spending nine years with the Pittsburgh Steelers before playing one game in the 2019 season with the New England Patriots. Brown joined Tom Brady and the Buccaneers last year, playing in eight games and winning a Super Bowl.

In early November, Brown was suspended for three games after being found to have misrepresented his vaccination status.

“The health and safety of players and personnel is our top priority,” a joint NFL-NFLPA statement read. “The protocols were jointly developed working with our respective experts to ensure that we are practicing and playing football as safely as possible during the ongoing pandemic. The NFL-NFLPA jointly reinforce their commitment and further emphasize the importance of strict adherence to the protocols to protect the well-being of everyone associated with the NFL.”

Brown returned to the field in week 16 against the Carolina Panthers, catching 10 passes for 101 yards.

The suspension followed the NFL’s investigation of Brown’s use of a fake vaccination card, which stemmed from a November Tampa Bay Times report.

According to the Times, Brown was able to obtain a fake vaccination card in July, after his former live-in chef was unable to acquire one for Brown and his girlfriend.

As reported by ESPN, Brown received the COVID vaccine shortly after arriving at Bucs training camp, after he was informed that his fake vaccine card could get him in trouble.

“Mr. Brown is vaccinated and continues to support the vaccine for any person for whom it is appropriate,” said Sean Burstyn, Brown’s attorney, in a statement obtained by Ian Rapoport of NFL Network. “The NFL made its determination and, instead of going through the drawn out and distracting process of challenging the outcome, Mr. Brown wrapped this up promptly and he will make this most of this time by treating his ankle injury. Mr. Brown will be motivated, well rested, and in the best shape of his life when he returns in [W]eek 16.”

Tampa Bay’s decision to allow Brown to return to the team following the suspension was widely criticized, as head coach Bruce Arians had previously said he would cut Brown if he “screws up” while in Tampa Bay.