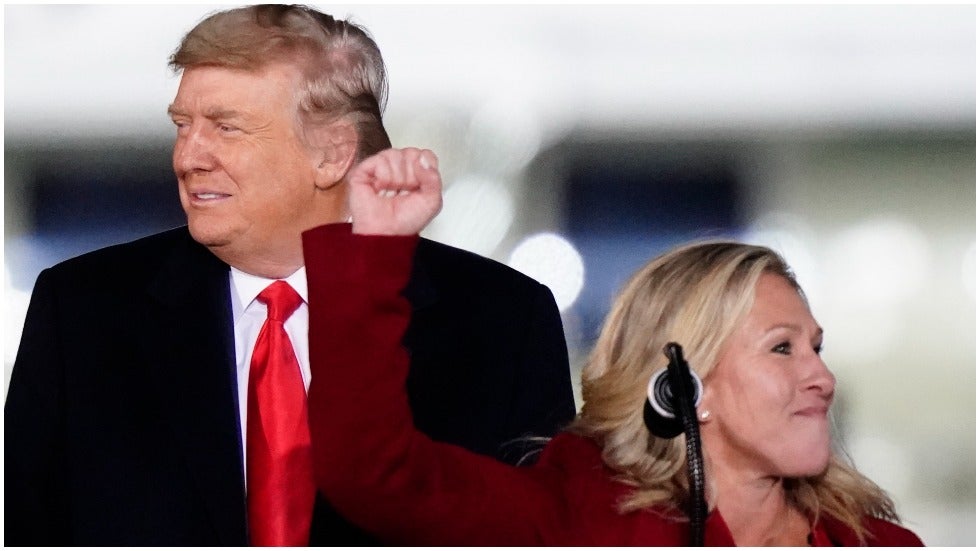 Trump called the social media network “a disgrace to democracy” adding that the company “shouldn’t be allowed to do business in this Country.”

He then encouraged his supporters to “drop off” both Twitter and Facebook calling them “boring” “hated by everyone” and claimed they only portray left-leaning views.

“They are a disgrace to our Nation. Keep fighting, Marjorie!” Trump said.

“We’ve been clear that, per our strike system for this policy, we will permanently suspend accounts for repeated violations of the policy,” a Twitter spokesperson told The Hill in a statement.

In response, Greene said in a Telegram post that she was not spreading misinformation.

“Twitter is an enemy to America and can’t handle the truth,” Greene said. “That’s fine, I’ll show America we don’t need them and it’s time to defeat our enemies.”

Trump himself was permanently suspended by Twitter, the signature communication platform of his presidency, days after the Jan. 6 Capitol riot “due to the risk of further incitement of violence.”

Twitter has said the suspension will remain even if Trump runs again for president in 2024.

Toddler dies in her sleep after testing positive to Covid-19 in Adelaide, South Australia

‘Ron Will Never Recover From This’: Latest Leftist DeSantis ‘Scandal’ Over Family Photos Gets Mercilessly Mocked