Topps Will Sell Its Sports Card Business to Fanatics, a Rival
Advertisement 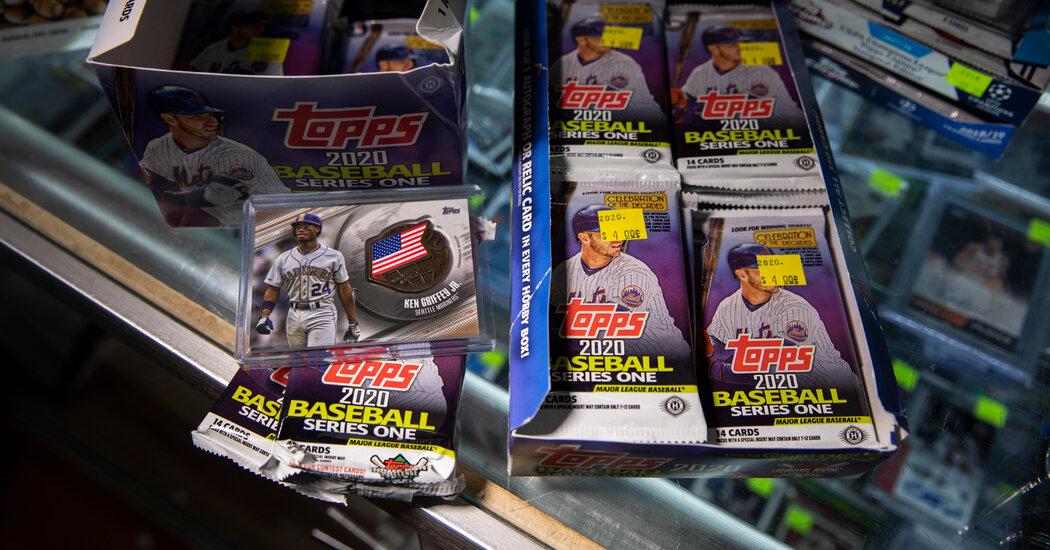 Topps, the business that put Bazooka bubble gum together with baseball cards more than half a century ago, now belongs to a fast-growing sports memorabilia empire that nearly knocked Topps out of the baseball-card game.

On Tuesday, Topps announced that it had sold its sports card business to Fanatics, a multibillion-dollar, 10-year-old company whose licensing business was built on sports fandom, technology and networking. The deal values Topps’s sports and entertainment division at slightly more than $500 million, according to people with knowledge of the situation, speaking on the condition of anonymity because the information is confidential.

Topps had previously announced a deal to go public. But in August, the company was blindsided when it lost its licensing agreement with Major League Baseball and the Major League Baseball Players Association to Fanatics, putting its future in doubt. Fanatics and Topps began discussing the acquisition of Topps’s card business roughly a month after Topps lost the baseball contract, a person familiar with the situation said.

“Topps is synonymous with card collecting — it’s the primary brand that people think of when you think of baseball cards and sports cards,” said Chris Ivy, the director of sports auctions for Heritage Auctions. “So the fact that they will be continuing going forward, I think is a great thing both for collectors and the industry as a whole.”

The Topps deal mirrors Fanatics’s purchase of the apparel company Majestic, which it acquired after winning the rights to make major-league uniforms, contracts that Majestic had previously won. The deal announced on Tuesday also underscores the breadth of businesses Fanatics has built, aiming to grow beyond ticketing and television, both of which are difficult to expand rapidly. Leagues are looking to new places for revenue, including advertisements on jerseys and legalized sports gambling — and trading card licensing agreements.

The Topps playing card business may not immediately transform under its new ownership. Topps cards will still carry the Topps logo, and the division’s roughly 350 employees will work for the Topps brand independently within Fanatics. But longer term, Fanatics hopes to create for Topps the digital agility that helped transform its licensed apparel business, which is set up to respond quickly to quick shifts in the popularity of an athlete.

Fanatics started its playing card business last year, around the same time it struck deals with unions for N.F.L. and N.B.A. players to produce football and basketball trading cards. The business raised $350 million in September in a deal that valued it at more than $10 billion. With the acquisition of Topps, Fanatics has the right to design, manufacture and distribute baseball cards starting immediately. (Fanatics’ original deal with Major League Baseball and the players’ union had allowed for a 2026 start.

Michael Rubin, the chief executive of Fanatics, called trading cards and collectibles “a significant pillar” in the company’s plans to become a “leading digital sports platform.” Mr. Rubin, whose circle includes Jay-Z and the baseball commissioner Rob Manfred, has in the last decade created a licensing and manufacturing company valued at $18 billion. Beyond hoodies and hats, Fanatics has also begun gambling and video game businesses.

Topps has ridden that wave, bringing in record sales of $567 million in 2020, a 23 percent jump over the previous year. Now Fanatics faces the question of whether it can sustain momentum given the trading card industry’s susceptibility to booms and busts.

The nearly century-old Topps has been through both. The company was started in Brooklyn in 1938 as Topps Chewing Gum, an effort to revive a struggling family tobacco distribution business. A little over a decade later, it began to package its gum with “Magic Photo Cards,” which featured Babe Ruth, Cy Young and other baseball stars. It started its annual set of baseball cards in 1952.

In 2007, Topps was acquired for $385 million by Tornante, an investment firm founded by Michael Eisner, the former Walt Disney Company chief executive, and the private equity firm Madison Dearborn Partners. Under its new ownership, Topps started Topps Now, which sells of-the-moment cards to capture a defining play or a pop culture meme. It also began to offer its cards as NFTs.

Mr. Eisner said in a statement on Tuesday that “the strong emotional connection between Topps collectibles and consumers of all ages” would make it “a jewel in the Fanatics portfolio.”

Topps’s plan to go public had valued its entire business at roughly $1.3 billion. That deal included its confectionary brands like Bazooka gum and its gift card business, which Tornante and Madison Dearborn continue to own. The candy and gift card unit brought in a third of Topps’s sales last year, according to an investor presentation prepared for the transaction. It has been renamed Bazooka Companies.

Tornante also maintains the rights to produce movies and television shows based on Topps brands, including the video game franchise MechWarrior/BattleTech and Garbage Pail Kids, a series of sticker trading cards introduced in 1985 as a parody of Cabbage Patch Kids.