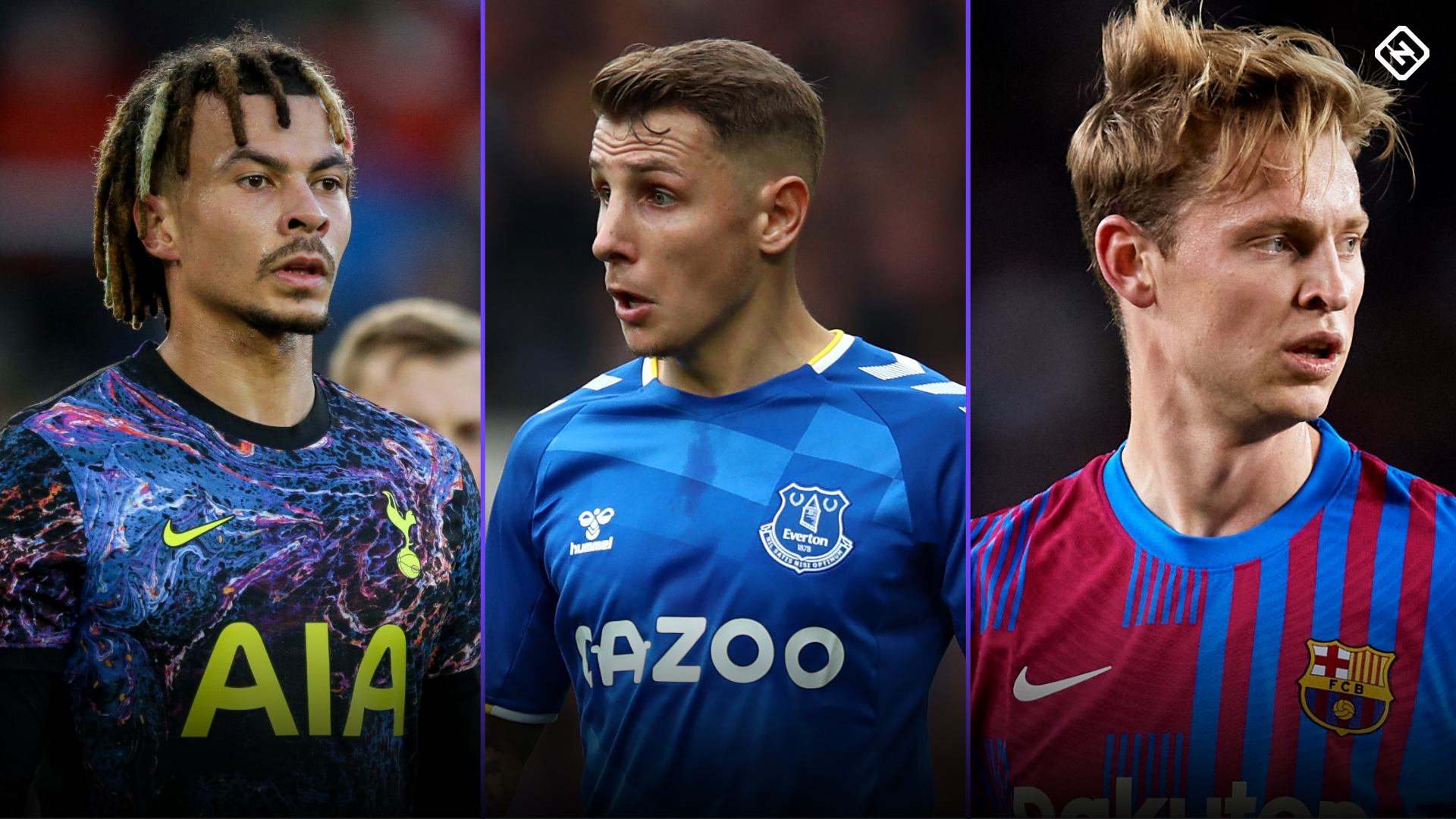 While summer is the time for clubs to revamp and restock, the January transfer window presents an opportunity for teams to make touch-ups, filling holes in their squad created by injury or poor perforomance.

The winter transfer window is often a quirky one, with the available player pool being much smaller and clubs looking to snatch players who have seen a dip in form or a falling out with their current club. There are typically fewer big-money moves in January, with clubs preferring to wait until the summer to splash the cash, but some teams feel enough pressure and panic to make big changes, especially if facing relegation.

The January transfer window can often prove to be a slow burn, and there are significant deals done late in the window. So who are the key players who could be presented with a change of scenery this winter? Here are 10 players whose names are already generating chatter.

Spurs chairman Daniel Levy has garnered praise over his tenure as transfer czar at Tottenham, but Dele Alli’s situation remains a dark spot on his resume. Resisting the urge to sell for big money after a wildly successful 2016-17 season, Levy has been forced to watch as Alli’s career has completely come apart. Nowhere near the player he was as a 21-year-old England starter, Alli is now 25 and needing a change of scenery.

Once arguably worth over $100 million, Alli can now probably be had by another club for around one-third that price, if even that. Newcastle seems a possibility, with the Magpies likely willing to take gambles to avoid relegation, although a loan move to Tyneside feels like less of an outright risk. Everton and West Ham are sliding clubs in desperate need of a January improvement, and there is far less risk for relegation at Goodison Park than at Newcastle. Alli could reunite with Mauricio Pochettino at PSG, although it would be difficult for the midfielder to find playing time in Paris.

Since impressing at Sheffield United on loan through the 2019-20 season, Dean Henderson has been stuck on the bench at Manchester United behind a resurgent David de Gea. The Spaniard looks back to his world-class best, and that is bad news for the young English international.

Still just 24 years old — very young by a goalkeeper’s standards — Henderson has understandably drawn interest and will be pushing for a way out of Old Trafford. A report in early December suggested Dutch side Ajax could be interested in a loan deal. Tottenham has also shown interest, although a summer move by Spurs would be more likely with Hugo Lloris at 35 years old and out of contract in July.

A loan move this January seems most likely, although Ralf Rangnick reportedly prefers having a bloated squad to cover any COVID-19 situations, which might not please the English keeper.

Barcelona has to free up cash, and fast. The Catalan side is looking to register Ferran Torres and is mentioned in just about every January transfer rumor, suggesting more business could be done. And yet, the club is strapped for salary cap space. That means players will be offloaded, and Dest could be on the chopping block. It appeared for a few weeks that Dest had been dropped altogether by new manager Xavi, but the Barcelona boss squashed that speculaton citing injury instead.

Still young and coachable at 21 years old, Dest’s defensive abilities have lagged behind his already sparkling attacking proficiency, and a move to a club that could deploy him at wingback seems most ideal. That could see the U.S. international receive interest from clubs like Chelsea or Manchester City, although Bayern Munich has also been rumored after nearly landing him ahead of Barcelona. Dest is “definitely not lacking in alternatives,” according to his agent Thies Bliemeister.

A move for around $30 million seems imminent, whether it comes in January or the summer, but a winter transfer does appear more likely for the young American.

At 31 years old, Trippier has been a regular starter for Atletico Madrid since his arrival in 2019, but things have not always been smooth in Spain. Amid heavy interest from Newcastle, it seems very likely that the England international will return to his home country this month.

Trippier seems the perfect option for Newcastle, as an experienced player who won’t cost a fortune, a solid stop-gap option for a club in dire need of defensive reinforcements. A deal for around $23 million would appear to be enough for fifth-placed Atletico Madrid to move on.

Raphinha is a different category of player from others on the transfer market because Leeds United will be desperate to fend off interest for the Brazilian in January as the club battles relegation and figures to need its in-form attacker. With eight goals heading into the new year, Raphinha has made himself known on the European landscape.

Still, he could be tempted by interest from massive clubs like Liverpool and Bayern Munich, with an $80 million offer possibly enough to entice the Premier League side. Bayern would be interested should Kingsley Coman departs, while Liverpool could probably use players to replace the likes of Sadio Mane and Mohamed Salah when they depart for the Africa Cup of Nations.

He should be a hot commodity this January, since he seems the perfect answer to questions raised at many clubs. At 28 years old, the French international has excelled at Everton since his arrival from Barcelona in 2018 and doesn’t seem to have a future with the Toffees after they acquired Ukrainian left back Vitaliy Mykolenko from Dynamo Kiev.

Digne has been absent from Everton’s matchday squad since early December when a reported rift between him and manager Rafa Benitez boiled over. Despite a contract that runs through the summer of 2025, Digne now represents a chance for many Premier League clubs to fill a big hole. Chief among the likely interested parties is Chelsea, who saw Ben Chilwell go down with an ACL tear. Inter Milan and Napoli are also clubs who could find themselves in the mix, according to reports in Italy.

Like Dest, the Dutch midfielder (below) has been an unfair scapegoat for poor team performances over the past season, and his time at Barcelona feels like it’s running out. De Jong would be a popular figure around Europe, with a change of scenery potentially helping him to recapture his form with Ajax years ago.

Still just 24 years old, his contract at Barcelona doesn’t expire until 2026, so it’s entirely possible that he stays should the club not need to make space on the wage bill. But based on reports, the feeling remains that De Jong has the needed mix of expendable and gathering interest eleswhere. The player’s father said a few weeks ago that “five top European clubs have called” regarding De Jong, but did not specify which clubs were intrigued.

De Jong was linked with a move to Man City before his Barcelona switch, but the Citizens’ squad feels full at this point, and it’s not like they need him. Manchester United would be an interesting fit, especially given the tactics Ralf Rangnick enjoys deploying that rely on central midfielders. Arsenal has been mentioned as a possibly interested side as well, although the Gunners have a greater need at forward. Liverpool could also be a landing spot, as the Reds are struggling with age (James Milner) and injury (Thiago).

At just 21 years old, Fiorentina striker Dusan Vlahovic has lit Serie A on fire, understandably attracting attention around Europe. Moving from Partizan Belgrade in the summer of 2018, he scored 33 goals in 40 Serie A appearances across the 2021 calendar year, and has attracted high-profile interest.

With his contract expiring in the summer of 2023, now could be the time for Fiorentina to sell. However, the club is right in the mix for a Champions League place, sitting sixth in Serie A on 32 points, just two back of the Champions League zone, and therefore has motivation to wait until the summer.

The price tag has been pegged in media reports at a whopping $80 million or potentially higher, which will make things tough on clubs like Bayern Munich, Tottenham, Barcelona, Arsenal, and Manchester United, all of whom have been whispered to be interested. At this point nobody has come forward to take charge of the situation and the summer feels like a more realistic scenario.

With just 202 Premier League minutes to his name this season, Anthony Martial has been public about his desire to leave Old Trafford. At 26 years old and still in his prime, Martial is under contract through the summer of 2024 but could push for a move now to find more playing time and squeeze his name back into the French national team picture.

“He explained to me he has been at Manchester United now for the last seven years and he feels it’s the right time for a change, to go somewhere else,” manager Ralf Rangnick said. “I think in a way this is understandable, I could follow his thoughts, but on the other hand, it’s also important to see the situation of the club.”

MORE: Why is Man United called the Red Devils?

Manchester United rejected a loan bid from Sevilla as the Spanish club only offered to pay half his wages, but clearly there are conversations taking place and interest for the United forward. Juventus has been mentioned as a possibility, as has Barcelona, with both needing attacking reinforcements. But the most intriguing option raised is Ligue 1 side Lyon. The French club sits in a disappointing 13th place in the Ligue 1 table and needs all the help it can get, possibly affording Martial a return to his boyhood club where he started as a youth player.

While it’s entirely possible that Pierre-Emerick Aubameyang stays at Arsenal past the January transfer window, that won’t stop the rumors from flying as teams hope to capitalize on his tumultous Arsenal situation.

The Gunners pulled Aubameyang’s captaincy due to a disciplinary issue, and he hasn’t made an appearance since the incident in early December. With Aubameyang leaving for the Africa Cup of Nations, it will be interesting to see how much interest he garners during the month while he’s away, potentially putting himself in the shop window with Gabon. An ESPN report stated Arsenal will listen to offers for Aubameyang in January, with his contract expiring in the summer of 2023.

Rumors have linked him to Barcelona, but with the Catalan side spending big on Ferran Torres and reportedly close to landing Alvaro Morata, the chances that they splash for another attacking player are slim. Everton and West Ham could both be options, while Newcastle may also find Aubameyang is just what they need to help avoid relegation. Juventus has been mentioned as another possible destination, although a loan to Italy would be more likely than a permanent deal.