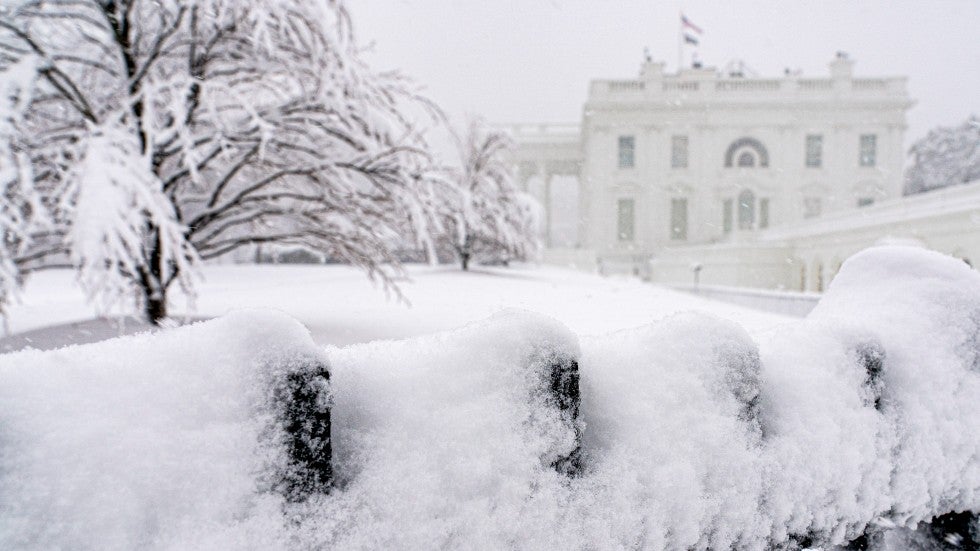 To receive The Hill’s 12:30 Report in your inbox, please sign up here: http://bit.ly/2UoupvN

–> A midday take on what’s happening in politics and how to have a sense of humor about it.*

To quote Paul Rudd in ‘Forgetting Sarah Marshall,’ ‘Oh the weather outside is weather’:

A winter storm warning is in effect in the Washington, D.C.-area today, with several inches of snow expected in the region.

According to the Capital Weather Gang, thundersnow is even possible. https://wapo.st/3JCsomJ

No pressure here: Here’s a video of Air Force One being de-iced (via C-SPAN’s Howard Mortman) Watch: https://bit.ly/34byLx7

A photo from the Shaw neighborhood of Washington, D.C.: https://bit.ly/3qDBQxE

At the White House:

This dog is THRILLED:

It’s Monday — Happy 2022! It’s a snowy day in Washington, D.C. I’m Cate Martel with a quick recap of the morning and what’s coming up. Send comments, story ideas and events for our radar to cmartel@thehill.com — and follow along on Twitter @CateMartel and Facebook.

Did someone forward this to you? Want your own copy? Sign up here to receive The Hill’s 12:30 Report in your inbox daily: http://bit.ly/2UoupvN

LATEST WITH THE CORONAVIRUS

And a booster for you!:

Via The Hill’s Peter Sullivan, “The Food and Drug Administration on Monday authorized Pfizer booster shots for people aged 12 to 15 years, another expansion in the population eligible for the third shots.” https://bit.ly/3mSZrcv

Oh, and the FDA updated its timeline for adult booster shots: “The FDA also shortened the time for all adults to get their booster shots, down to five months from six months after the initial shots.”

‘THE VIRUS IS SPREADING FASTER THAN EVER, BUT NEW DATA OFFER HOPE.’:

Breakdown of the numbers: https://cnn.it/2UAgW3y

Total number of vaccinations administered in the U.S.: 508 million shots have been given.

Seven-day average of doses administered: An average of 1.4 million doses.

For context: The U.S. population is roughly 331 million.

Breakdown of the numbers: https://bloom.bg/3iVTPLH

Via The Washington Post’s John Wagner, “Former president Donald Trump made an unusual endorsement in a foreign election on Monday, offering his ‘Complete support’ for Hungarian Prime Minister Viktor Orban, a right-wing populist leader accused of undermining the country’s democracy and moving toward autocracy during more than a decade in power.” https://wapo.st/3Jz1tZ8

Welcome back! Happy New Year! Here’s the laundry list of things you’re already behind on:

Via The Hill’s Jordain Carney, “Lawmakers are set to return to Washington, D.C., with a full legislative plate after punting some of their biggest priorities into 2022.” https://bit.ly/3zjUmiD

IN THE WHITE HOUSE

A lil’ something for the meat industry:

Via The Hill’s Brett Samuels, “The White House on Monday announced plans aimed at addressing rising prices for meat and poultry, including setting aside $1 billion for smaller producers.” https://bit.ly/3mRt3au

Why smaller meat producers?: “The White House has previously pointed to a small number of conglomerates for driving higher meat and poultry prices, which have been a major contributor to broader inflation in recent months.”

President Biden is hosting an event at 1:30 p.m. EST with farmers and ranchers to discuss meat prices. Livestream: https://bit.ly/3ndg0jR

President Biden and Vice President Harris are scheduled to speak on Thursday to mark the one-year anniversary of the Jan. 6 Capitol attack. https://cnn.it/3qGf1cN

Along with their remarks: “Their remarks will come alongside a slate of events prepared by House Speaker Nancy Pelosi to commemorate the insurrection, including a moment of silence on the House floor and a prayer vigil on the steps of the Capitol.”

AND ON THE OTHER SIDE OF THINGS:

‘SINCE JAN. 6, THE PRO-TRUMP INTERNET HAS DESCENDED INTO INFIGHTING OVER MONEY AND FOLLOWERS’:

Um, this is pretty wild:

Via The New York Times’s Azi Paybarah, “A meteor likely either ‘exploded or vaporized’ over [Pittsburgh, Pa.] on Saturday, a meteorologist said, setting off a strong vibration that one resident likened to a ‘shock wave.’ ” https://nyti.ms/3HvVzpT

The Senate is in. The House is out. President Biden and Vice President Harris are in Washington, D.C.

Thursday: The one-year anniversary of the siege of the U.S. Capitol.

Merrick GarlandRoberts calls for judicial independence in year-end report The 5 most significant hits to our legal system in 2021 Rep. Bonnie Watson Coleman discusses decision to keep some people on home confinement out of prison MORE and Agriculture Secretary Tom Vilsack

Pluto may be back, baby:

Via NBC’s Tom Metcalfe, “A team of scientists wants Pluto classified as a planet again — along with dozens of similar bodies in the solar system and any found around distant stars.” https://nbcnews.to/3qHyRUU

“The call goes against a controversial resolution from 2006 by the International Astronomical Union that decided Pluto is only a ‘dwarf planet’ — but the researchers say a rethink will put science back on the right path.”

Why it may be considered a planet again: https://nbcnews.to/3qHyRUU

And because you read this far, here’s a doggy that got himself into a pretty precarious situation: https://bit.ly/32F7cfw