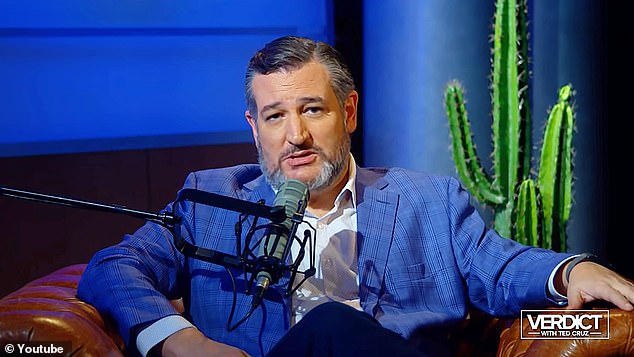 Republican lawmakers will be under ‘enormous pressure’ to impeach President Joe Biden if they take back the House of Representatives in this year’s midterm elections, Texas Senator Ted Cruz said on the latest episode of his podcast.

On The Verdict With Ted Cruz, the southern Republican accused Democrats of ‘weaponizing’ impeachment against twice-impeached former President Donald Trump.

Asked about whether his colleagues in the House will respond in kind, Cruz said: ‘I do think theres a chance of that. Whether it’s justified or not, Democrats weaponized impeachment.’

‘They used it for partisan purposes to go after Trump because they disagreed with him,’ Cruz claimed.

He said there are ‘multiple grounds’ on which to impeach Biden, singling out the southern border crisis and record number of migrants crossing into the US and straining American immigration infrastructure.

‘The most compelling [reason] is the utter lawlessness of President Biden’s refusal to enforce the border, his decision to just defy federal immigration laws,’ the senator said.

He added that the president’s rollback of Trump-era border restrictions amounted to a dereliction of duty under Article II of the Constitution, which puts it on the commander-in-chief to enforce federal laws.

Republican lawmakers have floated the idea that the president’s son Hunter Biden, and his murky foreign business dealings, could also be grounds for impeachment.

He said of the extraordinary political process,  ‘The more you weaponize it and turn it into a partisan cudgel — you know, whats good for the goose is good for the gander — I’ve said it at the time, when we have a Democratic president and a Republican house, you can expect an impeachment proceeding.’

‘That’s not how impeachment is meant to work but I think the Democrats crossed that line. I think there’ll be enormous pressure on a Republican House to begin impeachment proceedings.’

House GOP Leader Kevin McCarthy has already gotten to work preparing for multiple investigations into the Biden administration should his party win back the majority after the November elections, Axios reported last month.

He’s sent several ‘preservation notices’ across Biden’s Cabinet to retain documents that may be useful for future GOP-held committees.

Cruz said those probes are ‘extremely likely to happen,’ estimating that Republicans are 90 percent likely to take back the House and ‘it may be even higher than that.’

‘What’s interesting is in Washington, everybody assumes Republicans are gonna win. I think all the Democrats assume we’re gonna take the House, it’s almost baked into the cake of how everyone handles decision-making,’ he said. 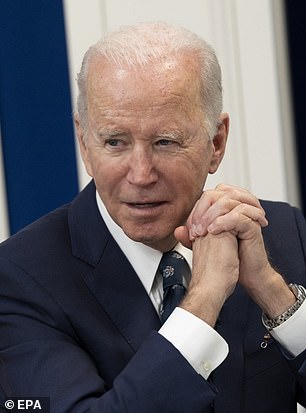 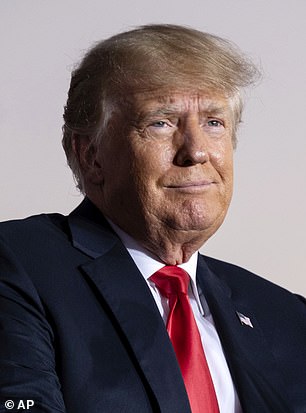 As to the chances of taking back the Senate, which is split 50-50 with Vice President Kamala Harris’ tie-breaking vote for Democrats, Cruz was less optimistic.

In this year’s midterms, 14 Democrat senators will be up for re-election compared to 20 Republican-held seats.

‘We have more vulnerable Republican seats up in the Senate than Democrat seats so we’ve got to have a few things bounce right, but if we take the House — which as I said is overwhelmingly likely — then I think we will see serious investigations of the Biden administration,’ Cruz predicted.

‘If we take the Senate, I hope we see the Senate engaging similarly in real oversight with teeth.’ 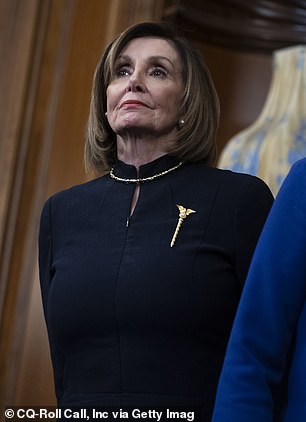 Democrat House Speaker Nancy Pelosi looks increasingly likely to lose her powerful position in November as more members of her caucus either retire or choose to run for a different office.

As recently as Monday night, Illinois Rep. Bobby Rush told the Chicago Sun Times that he’s ending his three-decade tenure in the House at the end of this term.

The former Black Panther has comfortably beat back numerous primary and general election challengers to keep hold of his state’s 1st Congressional District, including a bid from a young state senator named Barack Obama in 2000.

There are currently 221 Democrats and 213 Republicans in the House. But at the end of 2022, 24 Democrats are leaving the lower chamber compared to just 12 Republicans.

It’s also not the first time lawmakers have floated the idea of impeaching Biden.

A group of Republican lawmakers led by Ohio Rep. Bob Gibbs filed articles of impeachment against the president in September.

Gibbs claimed the president violated his oath of office on three points, according to text obtained by DailyMail.com: the southern border crisis, the evictions moratorium and Biden’s botched withdrawal from Afghanistan.

Reps. Andy Biggs of Arizona, Brian Babin of Texas and Randy Weber of Texas are co-sponsors on the effort.

Greene argued he is ‘unfit’ for office and ‘will do whatever it takes to bail out Hunter’. 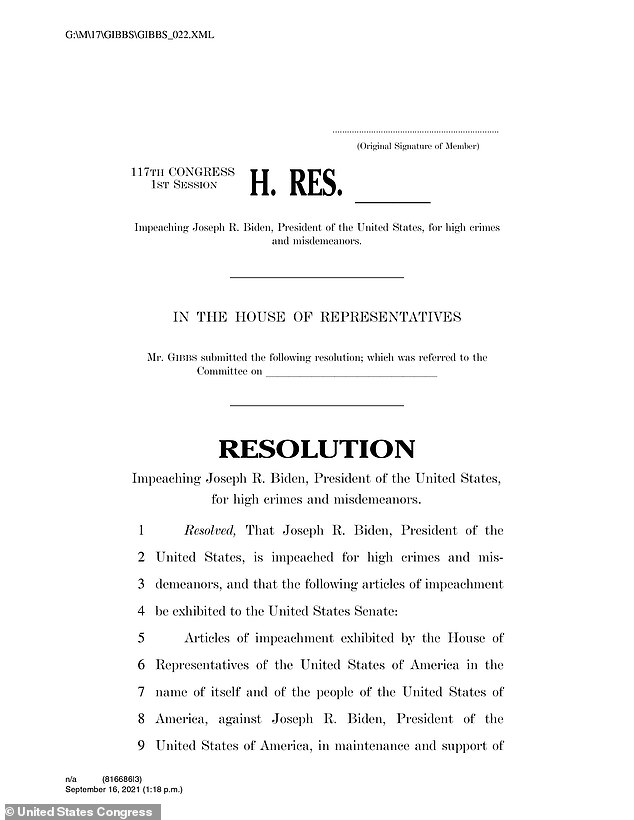 The impeachment articles filed by Rep. Bob Gibbs in September outline accusations that Biden failed his oath of office and violated the separation of powers