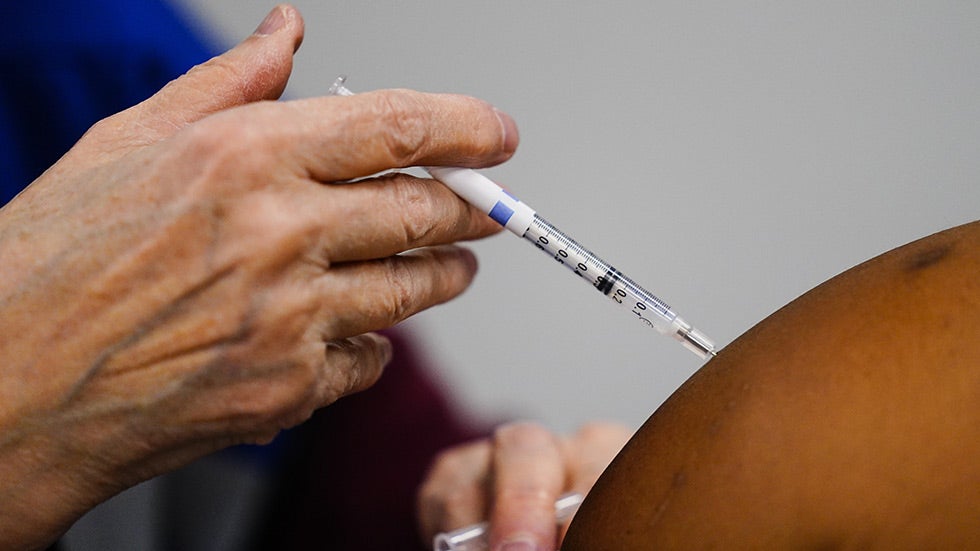 The United States’ record-setting number of COVID-19 cases amid the spread of the omicron variant and the anniversary of the violent Jan. 6 insurrection nearing next week are expected to dominate this week’s Sunday show circuit.

The U.S. is experiencing a new surge of COVID-19 cases, with numbers rapidly outpacing figures from last winter. On Wednesday, the country reached a record number of COVID-19 cases, reporting over 486,000 new infections, according to figures from the Centers for Disease Control and Prevention (CDC). The day prior, the U.S. saw over 439,000.

Initial research and data are starting to paint a picture of what the omicron variant may look like, with early indications that it is not quite as severe as health officials once feared.

A study released last month conducted by U.S. and Japanese researchers, suggested that less severe impacts on the lungs, throat and nose were caused by omicron. That study is still under review and was conducted on hamsters and mice.

Anthony FauciMichigan shifts, will follow CDC isolation guidance 2021’s top political celebrity moments These 3 issues will clobber Democrats in 2022   MORE also pointed to hospital data and international research suggesting that omicron was less severe among people who are vaccinated than the delta variant.

“We know now, incontrovertibly, that this is a highly, highly transmissible virus. We know that from the numbers we’re seeing,” Fauci said during a White House briefing earlier this week, adding “all indications point to a lesser severity of omicron versus delta.”

While those signs are encouraging, the CDC has faced some criticism for amending its guidelines regarding isolation periods. On Monday, the CDC said that as long as individuals who had COVID-19 were asymptomatic, they could shorten their isolation period from 10 days to five days.

The CDC suggested that following isolation people should wear masks regardless of vaccination status when in contact with others for the next five days.

“The reason is that now that we have such an overwhelming volume of cases coming in, many of which are without symptoms, there’s the danger that this is going to have a really negative impact on our ability to really get society to function properly,” Fauci said in defense of the new guidelines in an interview on NewsNation’s “Morning in America” on Thursday.

Fauci is scheduled to appear on ABC’s “This Week” and CNN’s “State of the Union” on Sunday.

Meanwhile, next Thursday will mark the one-year anniversary of a mob of supporters of former President Trump

Lawmakers, aides and reporters hid in offices, closets and a secure, undisclosed location in the Capitol as Trump supporters breached the building on Jan. 6. Over 700 people have since been charged in connection with the violent series of events, and a House select committee was established to investigate the events surrounding the riot.

That violent day has not only exacerbated partisan divisions between Democrats and Republicans, but has also driven a wedge between a smaller handful of Republicans who have broken ranks with the party in their response to the riot, notably including Reps. Liz Cheney

Cheney and Kingzinger both sit on the House select committee investigating Jan. 6, much to the disapproval of some of their GOP colleagues. They are the only two Republicans included on the panel.

Cheney is scheduled to appear on ABC’s “This Week” and CBS’s “Face the Nation” on Sunday.

Peter MeijerWest Virginia lawmaker slams GOP colleague over support for infrastructure law Trump endorses primary challenger to Peter Meijer in Michigan The 9 Republicans who voted to hold Bannon in contempt of Congress MORE (R-Mich.), who does not sit on the committee, initially voted in favor of a bill to set up a congressional investigation into the events of Jan. 6. Along with Cheney, Kinzinger and seven other House Republicans, he also voted to impeach Trump last year following the riot.

In June, however, Meijer and those seven other House GOP members who supported impeachment voted the party line against the creation of the select committee investigating Jan. 6. The group argued that a panel including only two Republicans would be overly partisan.

Meijer is scheduled to appear on NBC’s “Meet the Press.”

Bennie Gordon ThompsonJan. 6 committee hoping to issue interim report by summer: report Jim Jordan says he has ‘real concerns’ with Jan. 6 panel after sit-down request Jan. 6 panel seeks sit-down with Jim Jordan MORE (D-Miss.), chair of the House’s select committee on Jan. 6, is also scheduled to appear on NBC’s “Meet the Press,” as well as ABC’s “This Week” and CNN’s “State of the Union.”

Adam Bennett Schiff Rep. Mike Turner to replace Nunes in top House Intel spot The top political books of 2021 Jim Jordan says he has ‘real concerns’ with Jan. 6 panel after sit-down request MORE (D-Calif.), who also sits on the committee, is scheduled to appear on CBS’s “Face the Nation.”

Nancy PelosiBidens react to Betty White’s death: ‘A lovely lady’ The 9 politicians who had the most impact in 2021 Pelosi announces series of events to mark Jan. 6 anniversary MORE (D-Calif.) announced earlier this week the full schedule of activities to commemorate Jan. 6, including a conversation with historians Jon Meacham and Doris Kearns Goodwin, a moment of silence and a prayer vigil.

Below is the full list of guests scheduled to appear on this week’s Sunday talk shows: