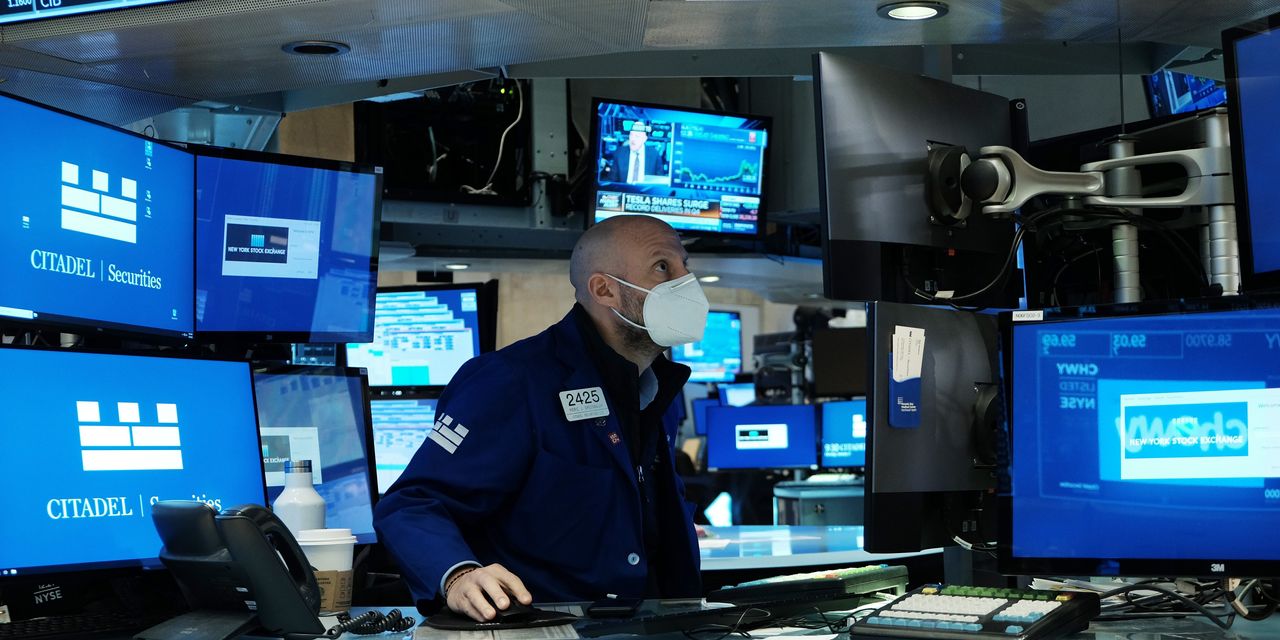 U.S. stocks wavered in midday trading Wednesday with investors looking ahead to minutes from the Federal Reserve’s recent policy meeting in the hope of gleaning fresh clues about plans to wean markets off pandemic-era stimulus measures.

The S&P 500 slipped 0.2% a day after the broad index pulled back from a record high as technology shares fell. The tech-heavy Nasdaq Composite Index fell 0.85%, while the blue-chip Dow Jones Industrial Average—which set its own record Tuesday—rose 0.2%.

Markets have largely begun 2022 on a strong footing, lifted by easing concerns about the Omicron Covid-19 variant. Signs that the variant is less likely to cause severe disease means investors are betting it won’t derail strong economic growth and corporate earnings like it did back in spring 2020.

“We essentially have been seeing earlier signs that Omicron is probably not as problematic as we initially feared,” said

a portfolio manager at PineBridge Investments. “Markets are very good at sniffing these things out, at identifying what things we should look through.”

Investors’ focus is shifting away from the new variant to moves by global central banks to tighten monetary policy as economies recover further.

“We expect growth to deflate as we go through the year. That will happen naturally. As the monetary, fiscal support fades, markets will have to stand on their own two feet,” said Mr. Redha. “It’s not a disaster but it is a headwind at the same time that central banks are on the move.”

In individual stocks, Beyond Meat shares rose 0.8% after the company said its plant-based alternative to fried chicken would be sold at KFC restaurants from next week.

and Hess rising around 1.4% and 0.4% respectively. Brent crude, the international oil benchmark, advanced 1.5% to $81.20 a barrel. On Tuesday, oil prices surged after the Organization of the Petroleum Exporting Countries and a coalition of Russia-led oil producers agreed to continue pumping more crude.

ADP’s December employment report, which measures the change in employees on private companies’ payrolls, said that 807,000 jobs were added last month, significantly above the 375,000 expected by economists.

Minutes from the Fed’s December meeting are set to be released at 2 p.m. ET. Fed officials said in that meeting they would speed up the pace at which stimulus measures are withdrawn, and issued projections for three interest rate rises in 2022.

The pivot from the Fed has pushed bond yields higher, which in turn has weighed on technology firms whose future earnings become less attractive when compared with bonds with rising yields.

Overseas, the pan-continental Stoxx Europe 600 index rose less than 0.1%. Asian stock markets were mostly lower, with the Shanghai Composite Index down 1%. In Japan, the Nikkei 225 edged up 0.1%.

Hong Kong-listed Chinese tech firms fell again, with the Hang Seng Tech Index down 4.6% and the broader Hang Seng Index 1.6% lower. The drop came after Beijing passed new rules tightening controls on tech companies’ overseas listings and activities, and after Tencent sold a $3 billion stake in Sea, one of its highflying affiliates. U.S.-listed shares of Tencent fell 2.3% Wednesday, and other Tencent-backed businesses, such as food-delivery giant Meituan, posted sharp declines.

—Hardika Singh contributed to this article.

Write to Will Horner at william.horner@wsj.com

PG&E equipment is blamed for starting the Dixie Fire in Northern California.