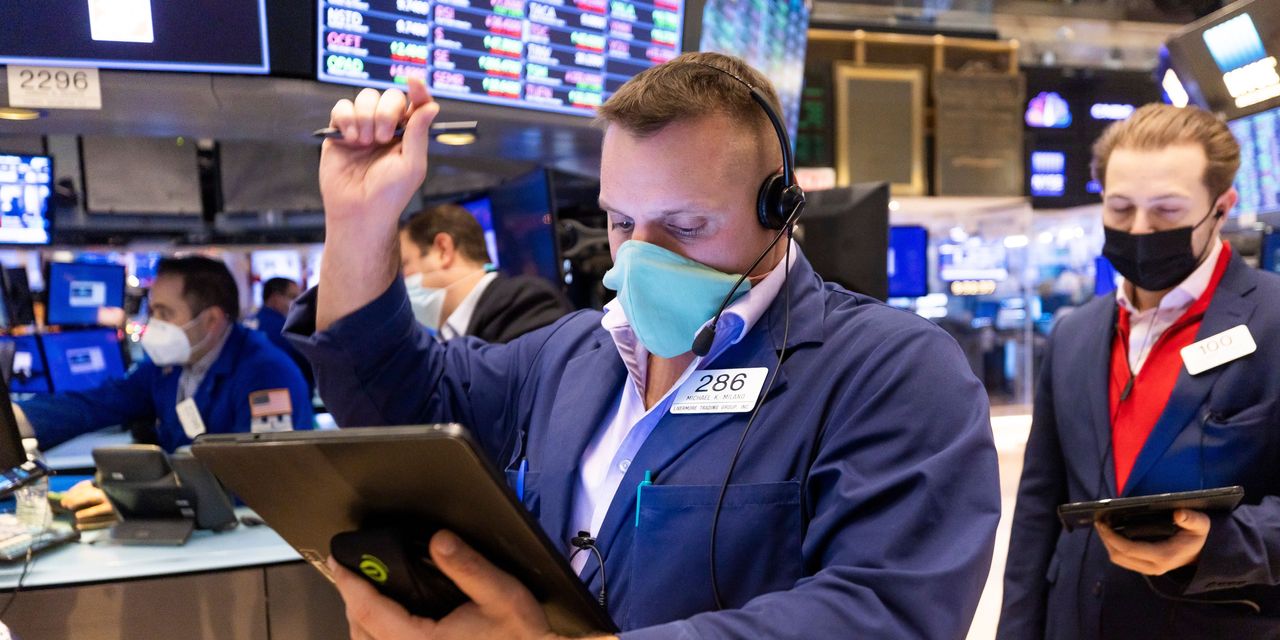 U.S. stocks fell Thursday in a choppy trading session, dragged down by investor worries about the impact the Federal Reserve would have on markets if it raises interest rates faster than once anticipated.

Markets have kicked off 2022 with choppy trading. Volatility accelerated Wednesday after minutes of the Fed’s most recent meeting showed officials eyeing a faster timetable for raising rates. That sent stocks tumbling, with the technology-heavy Nasdaq posting its biggest one-day percentage loss since February.

The choppiness continued on Thursday, with major U.S. indexes whipsawing between gains and losses for portions of the session before ultimately finishing lower. Both the S&P 500 and the Nasdaq closed down for a third consecutive day, with the Nasdaq losing 4.7% over the period.

Among the S&P 500’s 11 sectors, the energy and financials sectors emerged as leaders, rising 2.3% and about 1.6%, respectively.

each rose 2% or more, getting a boost from rising bond yields.

Small-cap stocks were also a bright spot. The Russell 2000 index, which measures the performance of such companies, rose 0.6%.

“As you transition from maximum liquidity to policy that’s becoming less accommodative, you want less exposure to those more speculative areas of the market,” said

co-chief investment officer at Truist Advisory Services. “One of our main theses for coming into this year is that we are positive yet realistic. On the positive side it’s that we still think markets have upside based on a solid economy and strong profits. But the realistic side is that…we expect more normal pullbacks.”

Investors are bracing for the possibility of a volatile spell for tech stocks, which have powered the market higher since the early-pandemic slump in 2020. Shares of companies such as

have benefited from low interest rates on top of blockbuster earnings helped by the shift to home working.

Rates, however, look set to increase, potentially as soon as March. Although investors say stocks can continue to rise in a period of rising rates that reflect a growing economy, tech shares and momentum stocks such as Tesla are seen as vulnerable.

“We could be in for a rough ride,” said

investment strategist at Danske Bank Wealth Management. Mr. Andersen expects the volatility to last at least until tech companies begin to report earnings later this month, which he said could encourage investors to buy those stocks back.

Mr. Andersen sees the selloff as a buying opportunity but intends to target the broad market and European banks that stand to benefit when rates rise, rather than U.S. tech.

Money managers say the catalyst for Wednesday’s selloff and the market’s continued volatility Thursday was the publication of minutes from the Fed’s December policy meeting. They showed officials believed rising inflation and a tight labor market could call for lifting short-term rates “sooner or at a faster pace than participants had earlier anticipated.”

Some officials also thought the Fed should start shrinking its $8.76 trillion portfolio of bonds and other assets relatively soon after beginning to raise rates, the minutes said. Investors pushed yields on government bonds higher. In turn, that hurt tech stocks whose future cash flows are worth less in today’s terms when a higher discount rate is applied.

Mr. Lerner, of Truist, is expecting further gains for financials and energy stocks as the economy and labor market continues to grow, he said. Among technology stocks, he currently has a tilt toward more quality names with larger market capitalizations and strong earnings.

“We think there are going to be sharp sector rotations throughout the year and timing those is going to be challenging,” he said. “Part of our strategy is going to be to have a barbell approach, looking at what are the best areas of the cyclical side and then we are pairing that with some tech on the growth side.”

On the economic front, Labor Department data showed there were 207,000 initial jobless claims, a proxy for layoffs, last week. A tightening labor market is one factor behind the Fed’s pivot toward raising rates sooner than the central bank had previously signaled.

The Labor Department’s December jobs report will be issued Friday. Economists surveyed by The Wall Street Journal are expecting the U.S. to have added 422,000 jobs.

Write to Caitlin McCabe at caitlin.mccabe@wsj.com and Joe Wallace at joe.wallace@wsj.com

Corrections & Amplifications
Facebook parent Meta Platforms was misspelled as Meta Platorms in an earlier version of this article. (Corrected on Jan. 6)

Lawsuit says Meta shares blame in the killing of a federal guard.