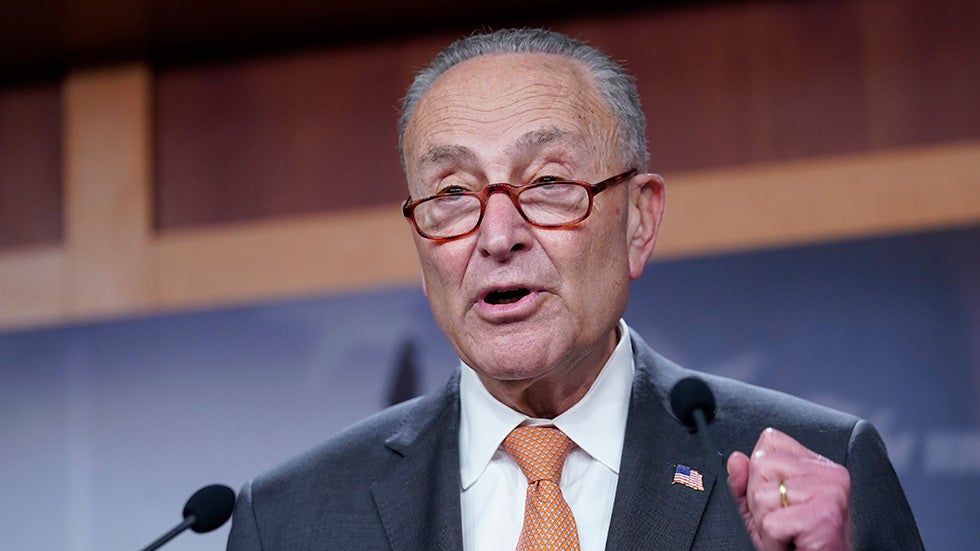 Senate Majority Leader Charles SchumerChuck SchumerBiden, Obama to speak at Reid’s funeral in Nevada Garland vows prosecutions ‘at any level’ over Jan. 6 For the sake of the planet, Build Back Better must be salvaged MORE (D-N.Y.) used a rare Friday session to make a lengthy plea for voting rights legislation and urge his own party to support changing the rules in order to pass it without GOP support.

Democrats convened the Senate on Friday as they prepare to force another vote on election legislation, likely next week. If Republicans block the bill, as they are expected to, Schumer has vowed to bring up filibuster reform by Jan. 17, Martin Luther King Jr. Day.

“I believe the Senate needs to be restored to its rightful status as the world’s greatest deliberative body. … If Republicans continue to hijack the rules of the chamber to protect us from protecting our democracy, then the Senate will debate and consider changes to the rules on or before Jan. 17,” Schumer said during a lengthy floor speech on Friday.

“If Senate Republicans continue to abuse the filibuster to prevent this body from acting, then I would plead with the Senate — particularly my colleagues on this side of the aisle — to adapt. And we must adapt for the sake of our democracy,” he added.

Democrats are heading toward a reckoning within their own caucus over the 60-vote legislative filibuster, which Republicans have used to block two sweeping election bills and a separate voting proposal named after the late Rep. John Lewis

John LewisTop House Democrat urges Senate to abolish filibuster to pass voting rights on Jan. 6 anniversary Without the lies there would have been no Jan. 6 fiasco Majority of business leaders believe democracy is threatened: poll MORE (D-Ga.).

Democrats could change the filibuster on their own if they had total unity within their 50-vote caucus, but they don’t. Democratic Sens. Joe Manchin

Kyrsten SinemaTop House Democrat urges Senate to abolish filibuster to pass voting rights on Jan. 6 anniversary Majority of business leaders believe democracy is threatened: poll Lawmakers discuss changes to Electoral Count Act after Jan. 6 MORE (Ariz.) have reiterated as recently as this week their support for a supermajority requirement and skepticism about the idea of exempting voting rights from the filibuster while leaving it in place for other issues.

Schumer has vowed that the Senate will take up rules changes, though Democrats haven’t yet formally unveiled a proposal for how to alter the legislative filibuster. In addition to the idea of a carveout, Democrats are discussing a talking filibuster that would let opponents delay a bill for as long as they could hold the floor or shifting from requiring 60 votes to break a filibuster to requiring 41 “no” votes to sustain it.

Support grew within the caucus for changing the filibuster as Democrats watched Republicans block voting and election legislation.

The hurdle is also a roadblock for other priorities for Democrats, including expanding gun background checks, raising the minimum wage, immigration reform and police reform. Schumer, on Friday, described the Senate as “deep freezer” for legislation.

But the months-long fight over voting rights has long been viewed as the driving force behind the increasing openness to change the rule. Supporters started 2021 with several of their colleagues on the fence and slowly whittled it down to Manchin and Sinema.

Donald TrumpJan. 6 brings Democrats, Cheneys together — with GOP mostly absent ProPublica reporter says movement to target government, political opponents had been rising prior to Jan. 6 attack Briahna Joy Gray: Biden going to ‘pay the piper’ for inaction during midterms MORE has falsely claimed was “rigged” — have debated, and in some cases enacted, new voting rules. But Republicans have dismissed the Democratic bills as an overreach and warned that a carveout from the filibuster for voting rights would in practice guarantee the filibuster is gutted across the board.

“It is clear that the modern Republican Party has turned its back on protecting voting rights. The party of Lincoln is increasingly becoming the party of the big lie. Not just Donald Trump but just about everybody here, with the rare exception,” Schumer said on Friday.

Democrats have spent the week linking their voting rights push to the anniversary of the Jan. 6, 2021, attack on the Capitol, when a pro-Trump mob breached the building as lawmakers and then-Vice President Mike Pence

Addison (Mitch) Mitchell McConnellSchumer: McConnell floating Electoral Count Act reforms ‘unacceptably insufficient,’ ‘offensive’ Jan. 6 and the GOP’s masterclass in the emptiness of words The Hill’s Morning Report – Presented by Altria – Marking the Jan. 6 ‘chaos and carnage’ MORE (Ky.), were in Georgia for the funeral of the late Sen. Johnny Isakson

McConnell, earlier this week, blasted the strategy to link the anniversary of the attack on the Capitol to the filibuster and voting rights discussion as “beyond distasteful.” But Democrats countered that they are linked by a belief in the “big lie,” a reference to Trump’s claim that the election was stolen. Election experts, and Trump’s own attorney general Bill Barr, have dismissed his claims of widespread fraud and his legal team lost dozens of court fights.

“The consequences of the former president’s words continue to erode our democracy, day to day. And if the enemies of democracy fail to get their way with baseball bats and pipe bombs, they have now turned their focus to a much quieter, much more organized effort to subvert our democrat process from the bottom up. In other words, a slow-motion insurrection, but equally insidious and ultimately more damaging,” Schumer said on Friday.

Queen will be protected by a 2,500ft ‘no-fly zone’ around Windsor Castle