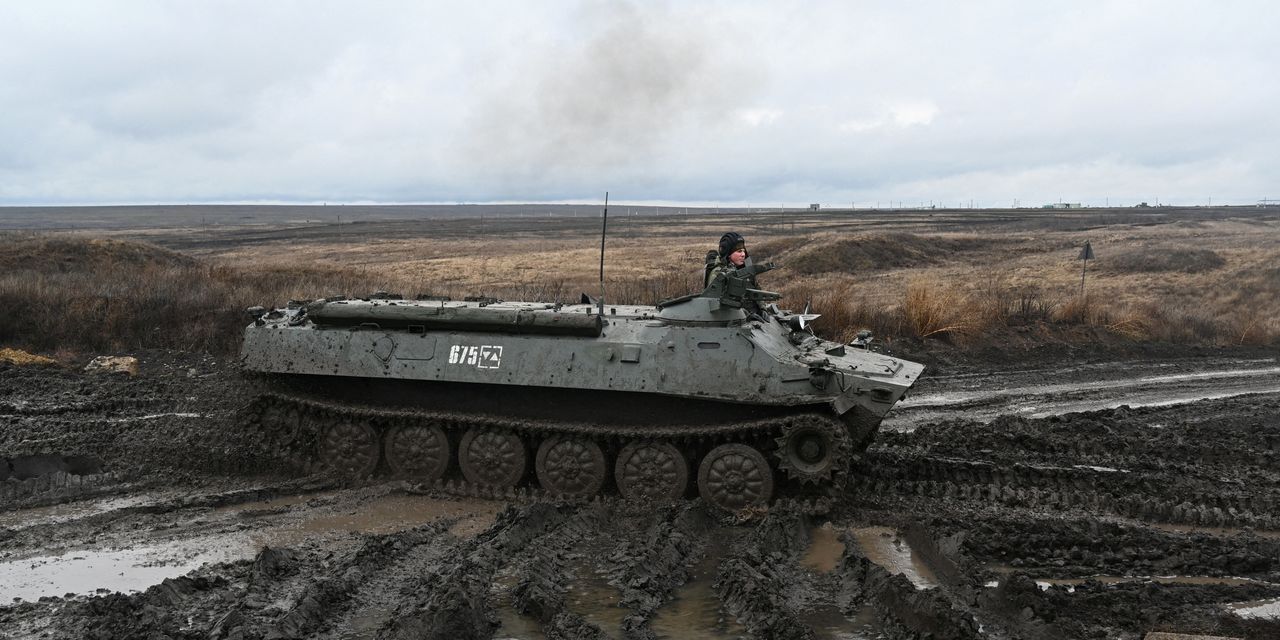 Russian markets have come under unexpected pressure, with investors increasingly concerned about a possible invasion of Ukraine and the sudden unleashing of unrest in neighboring Kazakhstan.

The ruble weakened to a more-than eight-month low against the dollar this week, with $1 buying 77 rubles, before recovering somewhat Friday. Both local currency and dollar-denominated sovereign debt sold off. The extra yield compared with Treasurys on a Russian government U.S. dollar bond due in 2023 has doubled since November, from around half a percentage point to a full percentage point. The MOEX, Russia’s benchmark stock index, lost 8% last quarter and has retreated further this week.

Those moves go against the country’s otherwise strong economic standing, high oil prices and a central bank that has raised rates multiple times to support the currency. Geopolitics, not economics, are driving Russian markets, investors said.

an emerging markets fund manager at GAM. “Ukraine is the issue.”

Russian troops have amassed on the border with Ukraine in recent months, spurring international concerns of another military invasion. The U.S. and the European Union already have sanctions in place against Russia, which would likely be expanded in response to any military action, analysts said. Among the possibilities advocated in Washington: curtailing Russia’s access to U.S. dollar banking transactions that serve as the lifeblood for global commerce, including Russia’s oil exports.

Mass protests in Kazakhstan this week over higher fuel prices are adding to investors’ concerns. Protesters have clashed with security forces and tried to storm government buildings, and President

has ordered the police and army to shoot without warning.

A Russia-led intergovernmental military alliance has said it will send troops to Kazakhstan, raising alarm bells for investors who are worried that Russia may use the unrest as an excuse to increase its presence and influence in another neighboring country.

“Markets are always on the lookout for any more Russian geopolitical involvement in the region, it is something investors exposed to Russia always have in the back of their minds,” said Simon Quijano-Evans, chief economist at Gemcorp. “There may be some spillover there and additional pressure on the ruble.”

Russia has long been a tricky market for investors. A debt crisis in the late 1990s burned a generation of speculators who dove in at the end of communism. The collapse of oil prices in 2014 and President

invasion of Crimea hammered the currency. Russian-sponsored election meddling in the West have led to further rounds of economic sanctions.

But intrepid investors have been rewarded with high interest rates and at times a relatively stable currency under its long-serving central bank chief,

The latest events come at a time when the Russian economy is at its strongest in years. A gusher of oil and gas revenues helped the country’s current account surplus increase by 3.5 times in 2021 through November to $111.4 billion, compared with the same period the previous year. Its foreign-exchange reserves rose by $40.8 billion last year.

Brent, the global benchmark for crude prices, is hovering at around $80 a barrel, well above Russia’s break-even price of about $40 a barrel. Natural-gas prices in Europe have surged, with the benchmark soaring over 235% in 2021. The rally extended into the new year, increasing by more than a third in January due to cold winter weather.

Russian companies haven’t gotten much of a boost. Shares of Gazprom, Russia’s biggest energy company, has edged up 1% since the start of the year.

“There has been kind of a dislocation between energy markets and the Russian market,” said Joseph Mouawad, a fund manager at Carmignac. He sees this as a buying opportunity, particularly shares of companies supplying Europe with gas.

This divergence is also seen in the debt and currency markets. Russia’s key policy rate is at 8.5%, after seven rate increases in 2021 as the central bank sought to tame inflation. Investors welcomed the tightening, especially as it came ahead of plans by the Federal Reserve to cut its bond purchases and raise rates.

Typically, raising rates attracts capital flows for bonds and currency. For emerging markets such as Russia, that is an important way to offset capital outflows into the dollar when the Fed is tightening policy.

But despite Russia’s rate increases, demand for ruble assets has weakened. “If we see escalation, inevitably Russian credit spreads would go wider,” said Timothy Ash, an emerging-market strategist at BlueBay Asset Management. “The risks are significant, these are the worst Russia-West relations in 30 years.”

Write to Anna Hirtenstein at anna.hirtenstein@wsj.com