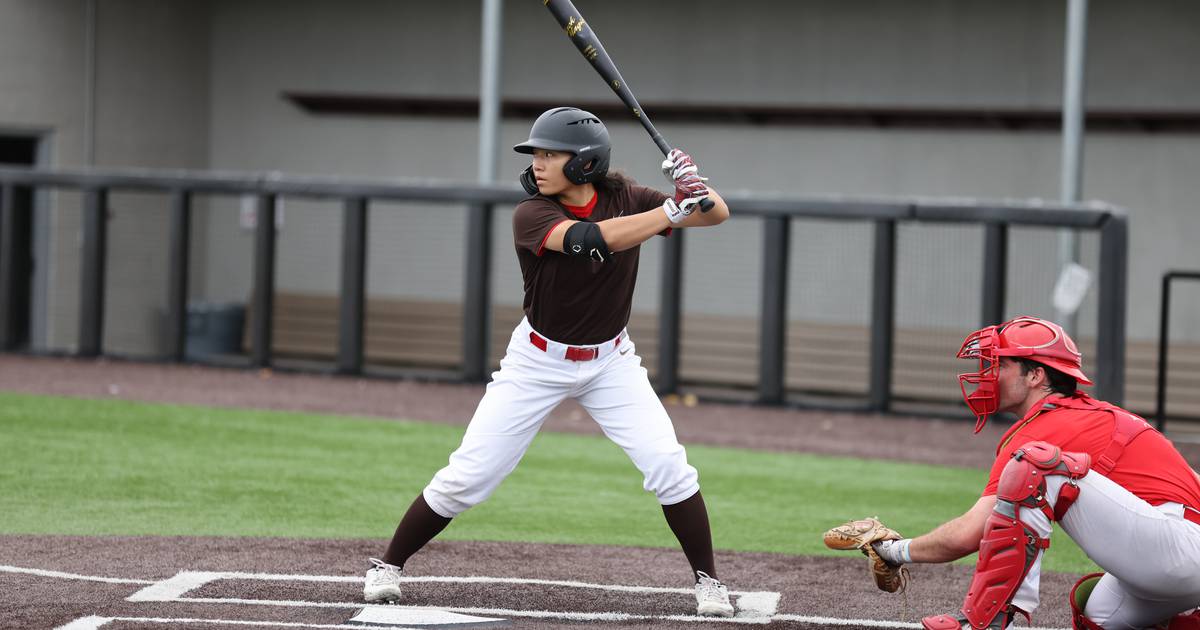 Every athlete’s playing days have to come to an end eventually.

Some are lucky enough to make it all the way to the professional ranks, collecting a fortune along the way. Others max out in college, while an overwhelming majority give up their game during childhood, the iron curtain of adulthood separating them from competitive sports once and for all.

For Olivia Pichardo, a freshman walk-on at Brown University who last month became the first woman ever named to an active NCAA Division I varsity baseball roster, even some of the people who watched her closest thought that she’d reached the end of her rope in high school.

“My dad actually told me about an old coach of mine who made a comment in my senior year of high school. He said, ‘Oh, well that was a good run,’” Pichardo told the Daily News, highlighting her former coach’s use of the past tense.

“He apparently said that to me, but I have zero recollection of that. I must be the type to block it out.”

Pichardo, a left-handed hitter and right-handed thrower who hails from Queens, was a standout pitcher and hitter on the youth baseball circuit. But as she was making a name for herself with a coiling swing and vicious 12-6 curveball, there were, predictably, some naysayers along the way. The graduate of Garden School in Jackson Heights says that her haters took many forms, but were rarely brave enough to say anything to her face, lest they get embarrassed during their next at-bat.

“There were a few instances that I remember, it’s not just one moment,” she said while trying to recall any of the comments that have fueled her. “It’s always been microaggressions, not full on ‘there’s no way you can do this.’ But I’ve never shown them that I can’t keep up. I’ve always been able to compete at every level. Nobody has flat out told me that I’m not fit for baseball before because I’ve always established that wherever I played.”

That included Forest Hills Little League, the travel baseball scene, collegiate prospect camps and the World Comes to Palm Beaches tournament in Florida, where her all-girl team took the gold medal in an international tournament against all boys. Pichardo thinks winning that tournament during her sophomore year of high school and getting to test her mettle against teams from Venezuela, Puerto Rico and around the world was one of the instances where she thought she may have a future in baseball beyond high school graduation.

While it was becoming clear that Pichardo was one of the best players on the field wherever she went, people kept trying to tear her down, perhaps because they felt threatened, or because they just could not accept that they were being schooled by a girl.

“Just random chirps that I might hear from opponents as I’m walking up to the mound,” Pichardo said. “Inappropriate things that I’m not going to say here.”

Speaking over the phone amid a whirlwind two weeks of making history, doing interview after interview and getting sick over Thanksgiving break, Pichardo is, in her own words, trying to take it all in now. Things blew up very fast for her, she says, and the minor illness she picked up over Thanksgiving gave her some time to finally relax.

The college baseball season isn’t too far away now, with the Bears opening their season in Atlanta on Feb. 24 against Georgia State. As a first-year player on a team with 12 upperclassmen, Pichardo understands her place in the pecking order. She’s not expecting to set the world on fire right away. In fact, when asked how she’d describe her game to someone who’s never seen her play, Pichardo didn’t highlight any of her pitches or talk about her approach at the plate. Instead, she immediately mentioned her ritual of picking up the signs from the third base box before every pitch and doing whatever is needed in the moment, music to any coach’s ears.

“I mean, I’m a freshman, so there are obviously other people who are going to play over me, and that’s expected,” Pichardo said. “I am considered a reserve outfielder, I guess. Pitching might not be completely out of the question, but we’ll see as we get further into the season.”

Pichardo’s baseball life hasn’t been limited to just playing either. In May, she was hired as an intern in the Mets’ amateur scouting department. The bulk of her days was spent learning about all the behind-the-scenes elements that go into a team’s draft strategy. She got a lot of practice writing scouting reports, but her crowning achievement was creating a tool that the front office brought with them to draft day.

“I made a PowerPoint with a lot of the important statistics that they use when considering who to draft,” she explained. “My project was used, I was told, at least eight times in their meeting room at the draft. That was pretty cool.”

Growing up in the shadow of Citi Field made Pichardo a dyed-in-the-wool Mets fan, which of course breeds a unique fan experience.

“They’re definitely a team that can break your heart,” she chuckled. “[Being a Mets fan has] given me a lot of rivalries in my childhood with Yankee fans.”

Now that she’s ten toes down in Providence and focused on the upcoming season, Pichardo knows that being the first woman in her position will dominate much of the conversation around her. There’s no hiding from the fact that she is inherently different from her teammates and opponents, or that any time she steps foot on the diamond, she’ll be blazing a trail for future generations. That’s not something that she’s running from.

“I do hold that title, so it would be kind of weird to [ignore it],” she said matter of factly.

Apart from her athletic exploits, Pichardo is also navigating the more universal feelings that come with living away from home for the first time. Though the Brown campus isn’t too far from home, relatively speaking, it’s still a new world. Her idyllic Ivy League surroundings certainly are not the same as the hustle and bustle of the city, which Pichardo said played a big role in creating her passion for baseball. In addition to instilling a love of the game in her, Pichardo has a wider appreciation for her home borough.

“I love Queens,” she said. “I’m really proud of where I’m from. You can get a meal from any part of the world on any street. Taking the train to school every day and seeing some wild things.”

Now part of a roster that includes players from Washington, California, Michigan, Florida, Colorado and pretty much every other region of the country, Pichardo is exposed to a handful of new cultures that aren’t necessarily found on the R or M trains. Asked if she possesses any especially New Yorker traits, one of the sporting world’s newest pioneers pauses before coming up with something.

“I have a black puffer jacket?” she laughed, before expressing her love for the ubiquitous part of the city’s fashion sense. “And, randomly on a couple of words, people will say that I said them a little funny.”

If all goes according to plan, eventually the sound of Pichardo’s slight accent and the presence of women in college baseball clubhouses will no longer seem a little funny.

Want holiday presents to arrive on time? These are the shipping deadlines