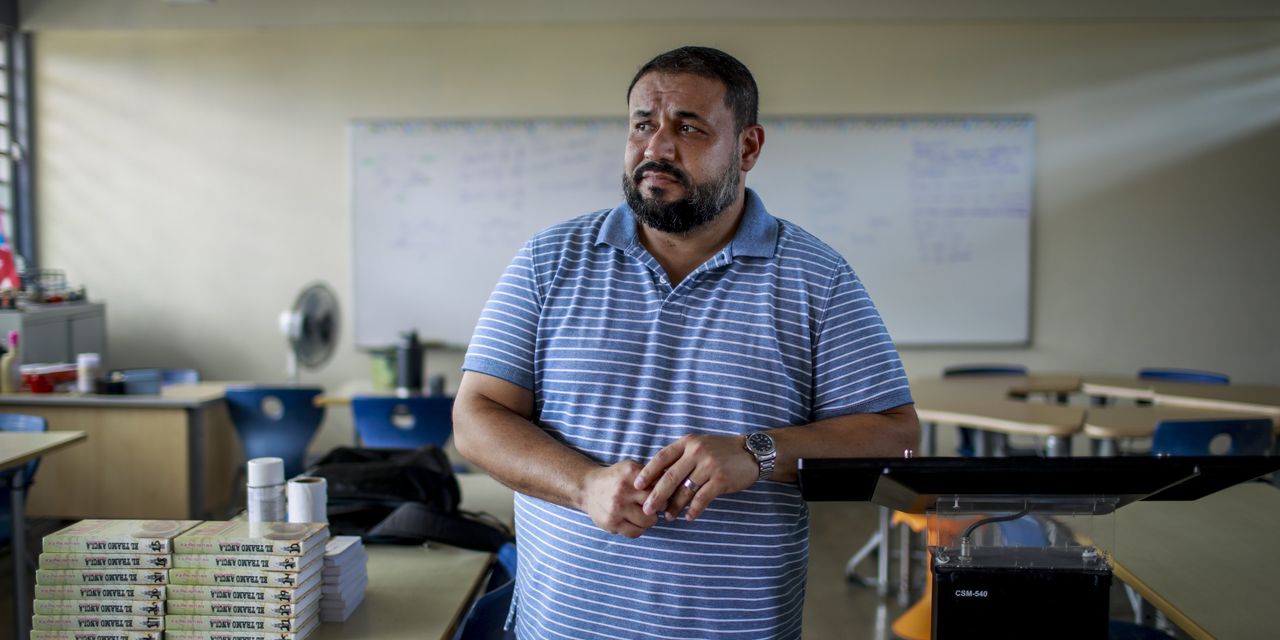 Puerto Rico’s long history of failing to pay its pension obligations is expected to haunt the U.S. territory even after its bankruptcy ends.

A proposed bankruptcy restructuring under consideration by a federal judge would end defined-benefit retirement programs covering tens of thousands of active teachers and judges in Puerto Rico. The pension benefits public employees have already earned would be honored when they retire, although current workers can’t accrue anything more.

Those measures would help close a roughly $55 billion gap between the retirement benefits owed to public servants in Puerto Rico and the funding set aside to pay them. Active teachers and judges are being shifted under the bankruptcy plan into defined-contribution retirement products akin to 401(k)s, ending the defined-benefit formulas in place when many of their careers began. Retirement ages would be increased, delaying when pensions can be tapped.

Fixing the pensions system in Puerto Rico will continue to burden both its employees and its shrinking base of taxpayers. The bankruptcy plan pays in full the defined benefits accrued over the past few decades, when politicians routinely dispensed pension enhancements and other retirement perks without the proper funding.

“Teachers that were close to retirement, those teachers are now going to have to work more years to retire with less money.”

has been a teacher in Puerto Rico for nearly 16 years. When he started, the 40-year-old San Juan resident’s monthly salary was $1,650. Since then, he has earned four teaching licenses and is completing his doctorate in education. He now earns $2,010 a month.

He said he was previously scheduled to collect $1,400 in monthly pension benefits when he expected to retire at age 55. Now, if the bankruptcy plan is approved, he said must wait to retire at 63 and will receive no more than $600.

“Teachers that were close to retirement, those teachers are now going to have to work more years to retire with less money,” he said.

Municipal bankruptcies are rare, but U.S. cities, counties and other small public entities have at times used bankruptcy protection to reduce pension liabilities, bond debt and other financial obligations. About half of states authorize their cities to declare bankruptcy, which can put pensioners against bondholders in competition for overstretched resources. Elected officials can face pressure to honor pensions, especially the benefits already promised.

“There’s pretty widespread agreement that pension benefits can be reduced in bankruptcy as a legal matter. But in these big municipal bankruptcy cases, I think what we’ve really seen is political pressure not to do that,” said

a professor at the University of Minnesota law school who has studied legal issues around public retirement.

A pre-markets primer packed with news, trends and ideas. Plus, up-to-the-minute market data.

Puerto Rico’s bondholders have accepted write-downs that cut $90.4 billion in scheduled debt payments to $34.1 billion under its bankruptcy plan, which analysts expect to be approved in the next several weeks. The oversight board steering the territory through its fiscal crisis insisted for years that annual pensions above $18,000 be reduced as well. A majority of public retirees in Puerto Rico collect monthly benefits of less than $12,000 a year, according to court papers filed by an official committee of pensioners.

and legislative leaders refused last year to authorize a bondholder deal unless accrued pensions were unimpaired, a concession the oversight board agreed to in October as the restructuring gained momentum.

“People have already performed the service, and this is part of the contract with them,” said

of the National Association of State Retirement Administrators. “The benefit is still owed, whether or not the government has set money aside to prefund it.”

Active teachers and judges will still have their pension accruals frozen under the bankruptcy plan, assuming it wins court approval. Teachers’ unions and judges’ associations in Puerto Rico voted to oppose the restructuring and argued against its approval in court, objecting to the midcareer change in retirement formulas.

the oversight board’s executive director, said retirees aren’t to blame for Puerto Rico’s fiscal crisis after previous governments underfunded pensions for decades. But without the benefit freeze, Puerto Rico faces billions of dollars in additional, unpredictable costs that would make the restructuring plan unfeasible, she said.

Since as early as the 1950s, elected officials added a range of benefits to retirement packages such as Christmas and summer bonuses, medical contributions, post-hoc cost-of-living increases, early retirement and personal loans for mortgages and cultural excursions. Employer contributions, which were set by statute, consistently fell short of what was required to keep the pension systems sound as politicians spent on other priorities.

“These are programs that affect people over an incredibly long period, and yet they’re being governed by people whose time frames run from now until the next election,” said

an oversight board member and senior fellow at the American Enterprise Institute, a conservative-leaning think tank.

Reforms that began in 1990 scaled back retirement packages for newly hired workers. But those changes didn’t tackle the unfunded liabilities stemming from older participants, many of whom could retire at age 55 with 30 years of service and lifetime payments of 75% of their highest annual salaries. Retirement benefits were curtailed again under a 2013 pension overhaul that was partially overturned in court.

With pension trust funds now depleted, retirement benefits are a line item on Puerto Rico’s budget expected to cost roughly $2.3 billion in the current fiscal year. After the bankruptcy ends, early-retirement and other compensation and benefit programs could be enhanced again for police officers, teachers and others under a deal between the oversight board and Mr. Pierluisi. To generate net savings, the government won’t replace employees who take early retirement, the governor said last month.

Spiraling retirement obligations aren’t unique to Puerto Rico. Pension burdens have ballooned for many other U.S. cities and states after two decades of disappointing market returns, lower-than-necessary government and worker contributions and losses during the 2007-09 financial crisis.

Some states such as Illinois and New Jersey are also heavily burdened by pension and bond debt, but federal law doesn’t give states a bankruptcy option. The most deeply indebted major U.S. city, Chicago, which lacks state authority to declare bankruptcy, has $11 billion in bond debt and net pension liabilities of $53 billion, according to Moody’s Investors Service.

“I’m very relieved that our pensions aren’t going to be cut, because that would affect my life tremendously.”

Investors in the broader muni market remain unfazed. Demand for municipal debt and its tax-free yields outstrips supply. The S&P Municipal Bond Index has risen 19% since Puerto Rico entered bankruptcy protection as of Dec. 22. Some Puerto Rico debt has even rallied as the bankruptcy settlement has coalesced, with prices on general-obligation bonds issued in 2014 rising to more than 86 cents on the dollar as of Dec. 10 from lows in 2017 of 21 cents.

started working in 1969 as an accountant in Puerto Rico’s Treasury Department before going on to work with the territory’s nutritional assistance program. Since retiring in 2000, she has received a pension of $1,200 a month, she said, a benefit that won’t be affected by the bankruptcy. The 80-year old Carolina resident said she is thankful, since her pension barely covers the costs of electricity, gas and telephone service. She relies on some assistance from her son to pay her rent.

“I’m very relieved that our pensions aren’t going to be cut, because that would affect my life tremendously,” she said.

—Heather Gillers contributed to this article.