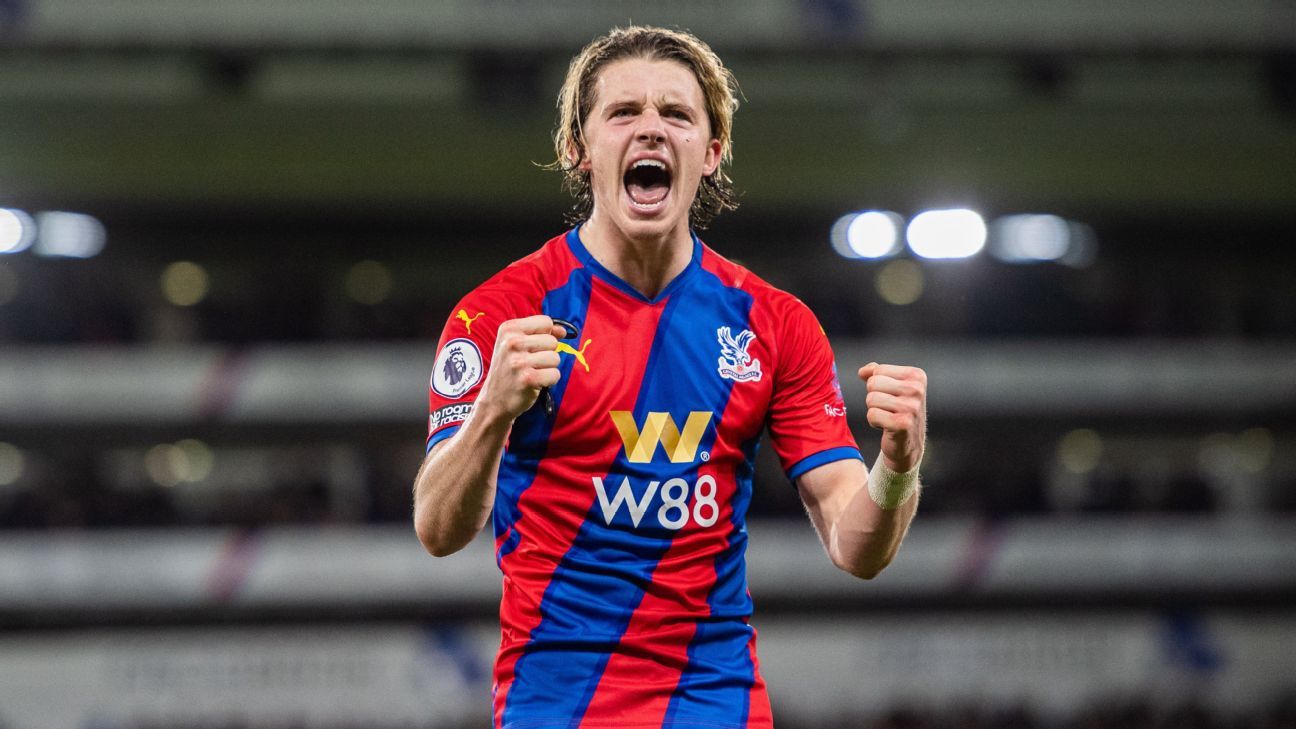 The 2022 winter window is open as of Jan. 1 and there’s plenty of gossip swirling about who’s moving where. Transfer Talk brings you all the latest buzz on rumours, comings and goings and, of course, done deals!

Crystal Palace‘s loan star Conor Gallagher has appeared as a surprise target for Paris Saint-Germain, according to the Sun.

The French champions are reportedly willing to part with £50 million in order to land Gallagher, who has scored six goals and registered three assists this season while on loan at Selhurst Park from Chelsea.

PSG boss Mauricio Pochettino is said to be a big fan of the in-form midfielder and he thinks Chelsea would be willing to let the 21-year-old leave west London for the right price. PSG are keen to secure the move in January, but are also willing to wait until the summer.

Chelsea have seen their squad depleted by injury and COVID-19, but are reportedly unable to recall Gallagher as a result of him having already played a specified number of games as part of his loan deal at Palace.

Blues boss Thomas Tuchel is keen to refresh the side’s midfield and, though he’s unable to recall Gallagher, is reportedly considering letting Ross Barkley, Ruben Loftus-Cheek and Hakim Ziyech all leave in order to bring in new faces and reignite their title bid in 2022.

09.47 GMT: Chelsea’s interest in Lucas Digne could be complicated by Newcastle’s desire to sign the left-back on a permanent basis, sources told ESPN’s James Olley.

The Blues are weighing up possible targets in the January transfer window after learning Ben Chilwell is set to miss the rest of the season following a decision to undergo surgery on a knee injury sustained in late November.

Chelsea head coach Thomas Tuchel has repeatedly bemoaned the depleted nature of his squad in recent weeks as they have fallen eight points behind Premier League leaders Manchester City and have Marcos Alonso as their only fit specialised left wing-back.

With Chilwell expected to make a full recovery this summer, Chelsea are ideally looking for short-term cover and would be keen to take Digne on loan.

However, Everton prefer a straight deal given a deterioration in the relationship between Digne and boss Rafa Benitez, who is also looking to raise funds to reshape his squad in the transfer window.

Everton are thought to want in the region of £25m, a figure that would not deter Newcastle following their Saudi-led takeover. Newcastle are 19th in the table with the joint-worst defensive record in the division and will look to sign at least two defenders in January.

Inter Milan and Napoli have also registered an interest, but it is not clear at this stage whether either club would be prepared to meet Everton’s valuation.

09.00 GMT: Barcelona coach Xavi Hernandez has not given up hope of getting Ousmane Dembele to sign a new deal despite a setback in negotiations this week.

Dembele, 24, is out of contract in June and is now free to talk to other clubs with Barca and his agents still unable to reach an agreement over new terms.

“I am not disappointed,” Xavi said of the situation. “It’s a negotiation. Sometimes advisors and agents can be difficult. But Barca’s position is clear and the process is ongoing.

“I am optimistic and I hope that Ousmane will make an effort [to renew]. He has a fantastic offer. There’s always a back and forth.”

Xavi also confirmed that tying Dembele down to a new deal would allow Barca the financial room to register “one or two signings” in January.

By getting the forward to commit to the club, Barca can spread the remaining amortisation payments on the transfer fee they paid for him in 2017 over the length of his new terms, creating room within their LaLiga-imposed spending limit of €97m for the season.

– Internazionale have shortlisted Sassuolo striker Gianluca Scamacca as a potential target in the summer, according to Calciomercato. However, Juventus and AC Milan are also interested, and the Bianconeri could look to make a move in January to steal a march on their rivals. Sassuolo would rather keep the striker until the end of the season, but they could be willing to part with the 23-year-old if Juve meet their €35-€40m valuation. Sassuolo are also at risk of losing Davide Frattesi for around €30m, with the same three clubs all said to be interested.

– Newcastle United are looking to increase their chances of Premier League survival by offering Pierre-Emerick Aubameyang the chance to leave Arsenal in January, according to the Daily Mirror. The Magpies have sounded out the Gunners about taking the 32-year-old striker on loan for the rest of the season with an option to make it permanent in the summer. Aubameyang’s days appear to be numbered in North London after having been dropped and stripped of the captaincy by boss Mikel Arteta. The Gabon star is now on duty at the Africa Cup of Nations, but could return as the Newcastle’s first marquee signing of their new ownership.

– Manchester United and Liverpool are both looking to sign Leeds United homegrown star, Charlie Cresswell, according to the Sun. The centre-back made his top-flight debut in September and his performances have seen him land on the radar of some of the Premier League’s biggest clubs. The 19-year-old is a Leeds supporter, but he could be tempted to leave at the end of the season if the Whites are unable to stay in the top flight. The teenager has been featured four times this season.

– Everton, Crystal Palace and Aston Villa are all monitoring Burnley star Dwight McNeil, according to the Sun. The Clarets are demanding £40m for the winger as they look to stave off bids for their other top stars, namely offers from Newcastle United for James Tarkowski and Ben Mee. Everton would need to raise funds in order to bid for the 22-year-old, while Palace would only be in a position to submit an offer if they were to lose Wilfried Zaha. Villa would also need to shift some of their squad members in order to do business with the Turf Moor club.

– Watford appear to be backing boss Claudio Ranieri despite a run of six games without a win, and the club have agreed deals to sign left-back Hassane Kamara from Nice and defensive midfielder Edo Kayembe from Belgian side KAS Eupen. That is according to the Athletic, which also believes Watford are eyeing a move for Besiktas‘ Domagoj Vida, and other incomings in the next few weeks.