NYC - "The City Is Cracking Down On Illegal Cannabis Retailers"
Advertisement 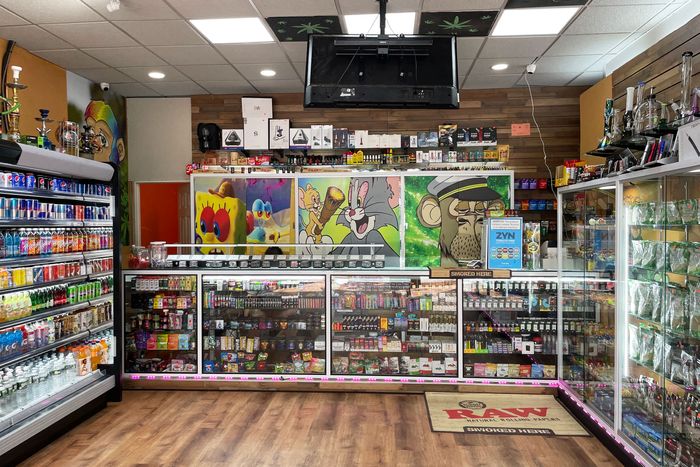 Photo: Bridget Read
Anyone living in NYC knows that the last couple years a lot has changed in the cannabis industry. From buying chronic on a shady corner and delivery services to retail shops, is new to cannabis and non cannabis users. Check out this article from curbed.com.

New York will have its first legal recreational cannabis storefront up and running on December 29. The Housing Works–operated shop will take over the space previously occupied by the Gap on 8th and Broadway, a sign of hard times for traditional retail (denim, khakis) and fast times for the new (marijuana). There will be “75 to 100 unique products” on offer, including edibles and pre-rolls. Absent from the location, tragically: kaleidoscopic murals featuring the friendly, stoned faces of Rick and Morty, SpongeBob, or the Pink Panther; neon lights; décor such as a skull with a joint in its mouth; and exotic Cheetos and imported Korean Ruffles. It also won’t be open between the hours of 2 and 8 a.m., which is generally when exotic Cheetos and imported Korean Ruffles are the only things you want to eat.

Why? Because, per New York’s Office of Cannabis Management, the era of the weed bodega — the tacky, snack-filled corner-store purveyor, like the regular bodega’s stoner cousin — is about to be over. Instead, the state’s legal weed retailers will be subject to an extremely long list of regulations that includes rules on everything from location to security to aesthetics. The compliance requirements will undoubtedly be onerous and expensive for many of the operators vying for licenses, but the décor rules in particular seem designed to kill the gray-market upstarts that flooded the city in the beautiful, wild period between decriminalization and the rollout of official licenses. It’s as if regulators walked into a humble weed bodega — Cloudy Vibez, Weed 4 U, Kannabis Korner — and banned everything they saw: “cartoons,” “bubble-type or other cartoon-like font,” “bright colors, “neon,” the terms “candy” or “candies,” “kandy” or “kandeez,” and “symbols, images, characters, public figures, phrases, toys, or games” commonly marketed to people under 21. Also barred are signs or business names “depicting cannabis, cannabis products, or the imagery or action of smoking or vaping.” As the city begins to enforce these rules in earnest, the welcoming visage of a rasta Alvin the Chipmunk will begin to disappear from our streetscape.

The benefits of the legal market are obvious: Gray-market vendors have been found to be selling product tainted with bacteria. And people should be able to buy weed in New York from a store that doesn’t have E. coli — sure. (Although supposedly highly controlled, model recreational weed purveyors have been found to sell contaminated goods, too — same as we have failures in the safety controls on markets from infant formula to produce.) Is it probably for the best that cannabis storefronts aren’t designed to look like weed Disney World, so that passing 6-year-olds will stop begging their parents to go inside? Yes.

But, as written, the guidance signals the end of the deranged irreverence of the current market. (As Ovid once wrote, “Beauty is a fragile gift.”) If a store can’t have a giant inflatable blunt as part of its visual identity, what is left for the senses? The sterility of Med Men? Tragic. Can a store not be safe, regulated, and secure as well as painted with a giant portrait of Ren & Stimpy ripping a bong? Can’t we, at the very least, black out the store windows so that the spicy chicken-flavored chips and Kool-Aid man mural inside can be appreciated by the 21-plus set?

The answer appears to be no, at least in New York. And with the news in November that City Hall launched a task force to combat illegal cannabis sales, and issued over 300 civil violations in its first week, the era of the weed bodega may be truly coming to an end. Oh, we hardly knew you!

Related Topics:cannabismarijuanaNew York
Up Next

NYC Cannabis- “The City is Cracking Down On Illegal Cannabis Retailers”