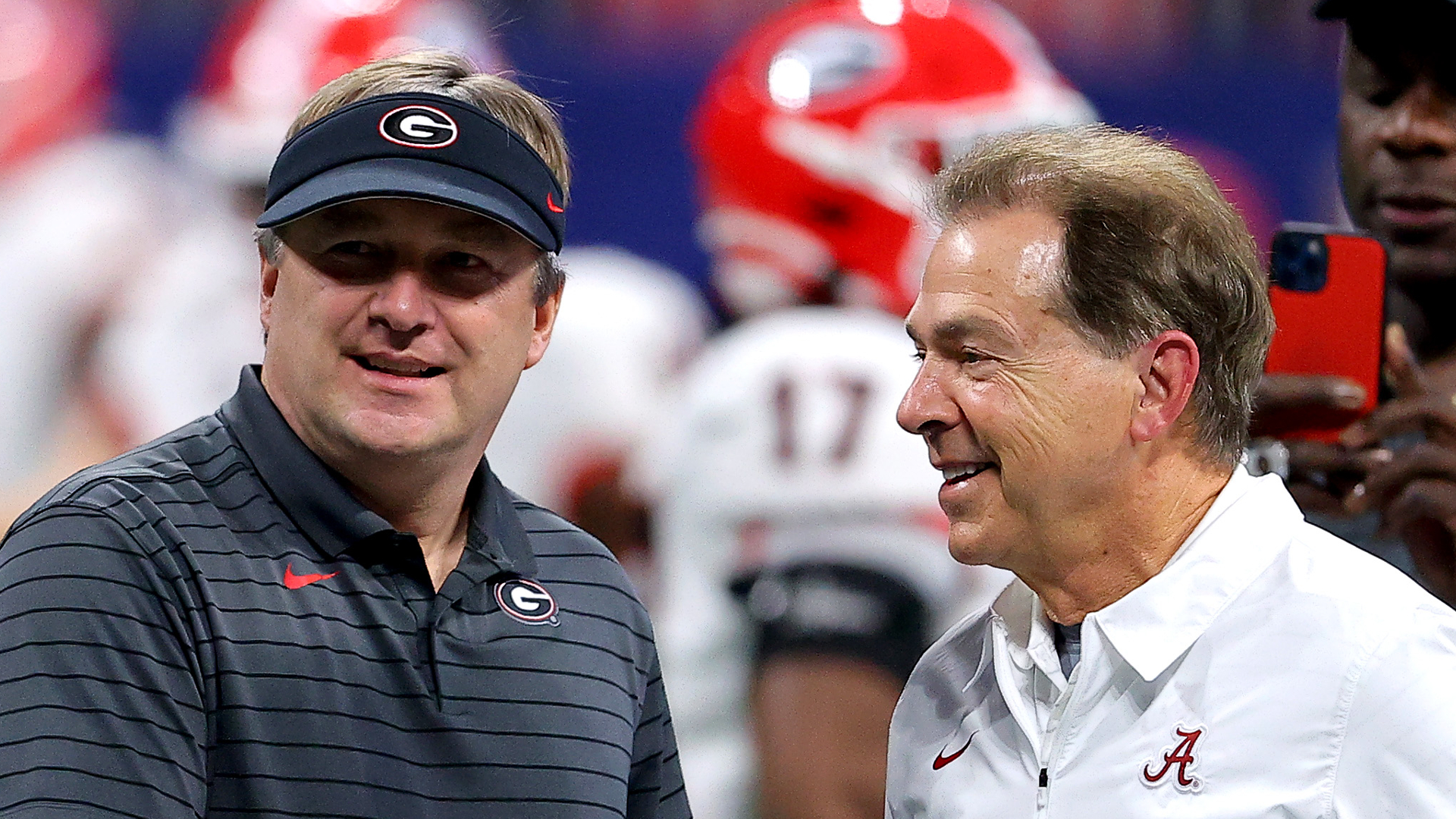 For the second time of the College Football Playoff era, Alabama’s Nick Saban and Georgia’s Kirby Smart will meet in an all-SEC national championship matchup.

The top-ranked Crimson Tide secured their trip to Lucas Oil Stadium with an old-school 27-6 victory over No. 4 Cincinnati in the Cotton Bowl. The third-ranked Bulldogs earned their chance to rematch against Alabama with a 34-11 beatdown of Michigan in the Orange Bowl.

The two have had an eventful rivalry since Smart left Alabama to become head coach at Georgia. This will be the fifth time the coaches will meet with both teams ranked in the top five, and Saban owns a 4-0 record. Alabama has come from behind in all four games to win, three times erasing double-digit deficits.

Friday’s semifinal victories guarantee the SEC will earn yet another national championship. The only question now is which of Saban and Smart will emerge victorious. The two have already met this season, as Alabama scored a 41-24 victory over the Bulldogs in the SEC championship game to secure its bid to the playoff.

The victory came as a surprise to many college football observers, not only because Alabama put up 41 points on what was considered a potentially all-time great defensive unit, but also because the Crimson Tide had struggled to victories over Florida, LSU, Arkansas and Auburn. Georgia, meanwhile, ran roughshod over each of its opponents all season, never facing a serious threat until its first loss.

With that, Sporting News looks back at the history of Saban vs. Smart:

What is Nick Saban’s record vs. Kirby Smart?

The 2018 national championship game between No. 4 Alabama and No. 3 Georgia marked the first meeting between Saban and Smart since the former left Alabama as its defensive coordinator to take over as head coach of his alma mater. The Bulldogs jumped out to a 13-0 lead, prompting Saban to bench two-year starting quarterback Jalen Hurts at the half in favor of Tua Tagovailoa.

The freshman helped Alabama get on the board before Georgia, under then-quarterback Jake Fromm, lengthened its lead to 20-7. Tagovailoa led the Crimson Tide to 13 straight unanswered points (including the game-tying score on fourth down) to send the game to overtime. Rodrigo Blankenship put the Bulldogs up on the board first with a 51-yard field goal. Tagovailoa took a 16-yard sack on the Tide’s first offensive play before hitting DeVonta Smith for a 41-yard go-ahead touchdown — their first lead of the game — to win 26-23 in overtime.

No. 4 Georgia rematched against top-ranked Alabama in the SEC championship game with a College Football Playoff berth on the line. It seemed as if the Bulldogs would exact revenge on the Crimson Tide after they jumped out to a 28-14 third-quarter lead. Tagovailoa managed to get the Crimson Tide to within one score after a 51-yard touchdown to Jaylen Waddle, but was lost for the game after suffering an ankle injury.

Once again, Saban turned to his backup — Hurts, this time — to lead the comeback victory. He led Alabama to 14 unanswered fourth-quarter points, including the go-ahead 15-yard touchdown run with 1:04 left in regulation, to secure the 35-28 victory over Georgia.

Saban and Smart once again met in a top-four meeting, this time in the 2020 regular season. Once again, the first half suggested the game would be a back-and-forth affair, with both teams trading blows en route to a 24-20 halftime lead for Georgia. The Bulldogs may have secured their third halftime lead in as many tries, but Alabama managed to wrest momentum with a 52-yard field goal as time expired at the half. Georgia managed to hold onto the lead for the first 11 minutes of the second half before Heisman Trophy finalist Mac Jones hit Waddle for a 90-yard go-ahead touchdown with four minutes remaining in the quarter.

Alabama was able to secure a 41-24 victory over the Bulldogs after two more touchdowns and a second-half shutout by the defense.

Georgia once again took an early lead over Alabama, jumping out to a 10-0 advantage. But Alabama rattled off three straight scoring drives — two touchdowns and a field goal — to take its first lead of the game in the second quarter. Georgia tied the game at 17 apiece with a 32-yard pass from Stetson Bennett to Ladd McConkey with 2:06 remaining in the half. But Heisman Trophy winner Bryce Young put Alabama on top again with an 11-yard touchdown run with 26 seconds left in the half.

Alabama didn’t relinquish the lead for the rest of the game. Young hit Jameson Williams for a 55-yard touchdown strike for his second long touchdown of the game following a 67-yarder earlier in the second quarter. A 42-yard interception return for touchdown by Jordan Battle made the score 38-17 in favor of Alabama with 11 minutes remaining. The Bulldogs scored a late touchdown to make it closer, but couldn’t close the distance in the loss.