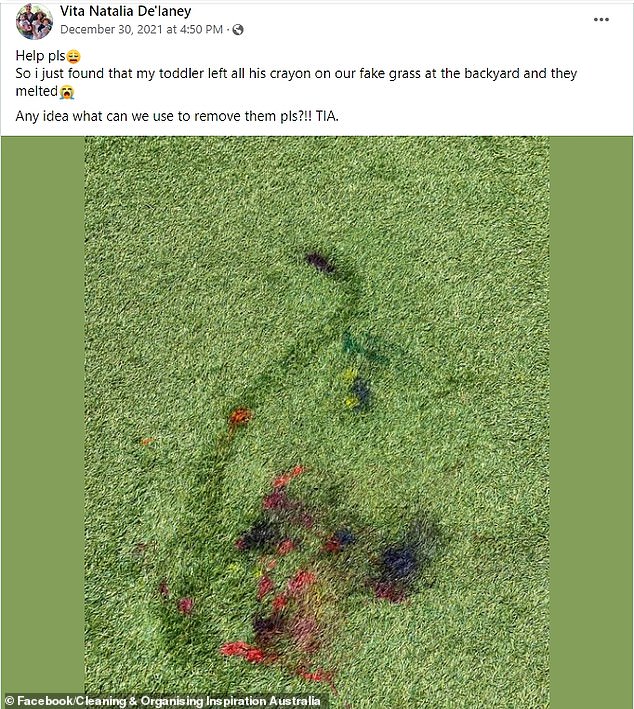 An Australian mum has turned to Facebook for some much-needed advice after her toddler’s crayons melted on her yard’s artificial grass.

‘So I just found that my toddler left all his crayons on our fake grass at the backyard and they melted,’ Vita Natalia De’laney wrote in a post to popular group Cleaning and Organising Inspiration Australia.

Her post attracted dozens of comments from people sharing their tips and ideas on how to remove the wax.

‘Since the crayon does not penetrate the plastic, it should be easily scraped off once it has hardened. To get it as hard as possible, place an ice cube over the area for a few seconds, until it is cold and brittle. Quickly use the spoon or scraper to gently scrape it away from the plastic,’ one person suggested.

‘This happened to mine too. I just waited till it heated up next day put kitchen towel over it and stood on it. Most of it soaked into the kitchen towel. Then I just sprayed fairy liquid on the rest and washed it with my scrubbing brush,’ wrote a second.

‘I;d put police tape around “crime scene” it will keep the neighbours talking, while your child thinks it has a pretty frame around it,’ joked a third.

Others said she should contact the company who laid the turf for advice on how to clean it to avoid ruining it even further.

‘Honestly I’d ring the people you got it from?? It looks like decent fake grass not the cheap stuff. We got ours from Australian Outdoor Living, maybe give them a call and ask. I’m sure they’ve heard it all before,’ a person said.

The mum-of-two thanked everyone for their suggestions and said she tried to remove the stains with dishwashing liquid, warm water and even a bit of micellar water.

‘It seems fading little bit for sure but I guess I will do it again tomorrow since it will be freaking hot day again like around 37 in Adelaide,’ she wrote.

Thanks to the heat, Vita said she has ‘almost’ removed the crayon wax after scrubbing again with dishwashing liquid and warm water.

Today’s top headlines from The Telegraph