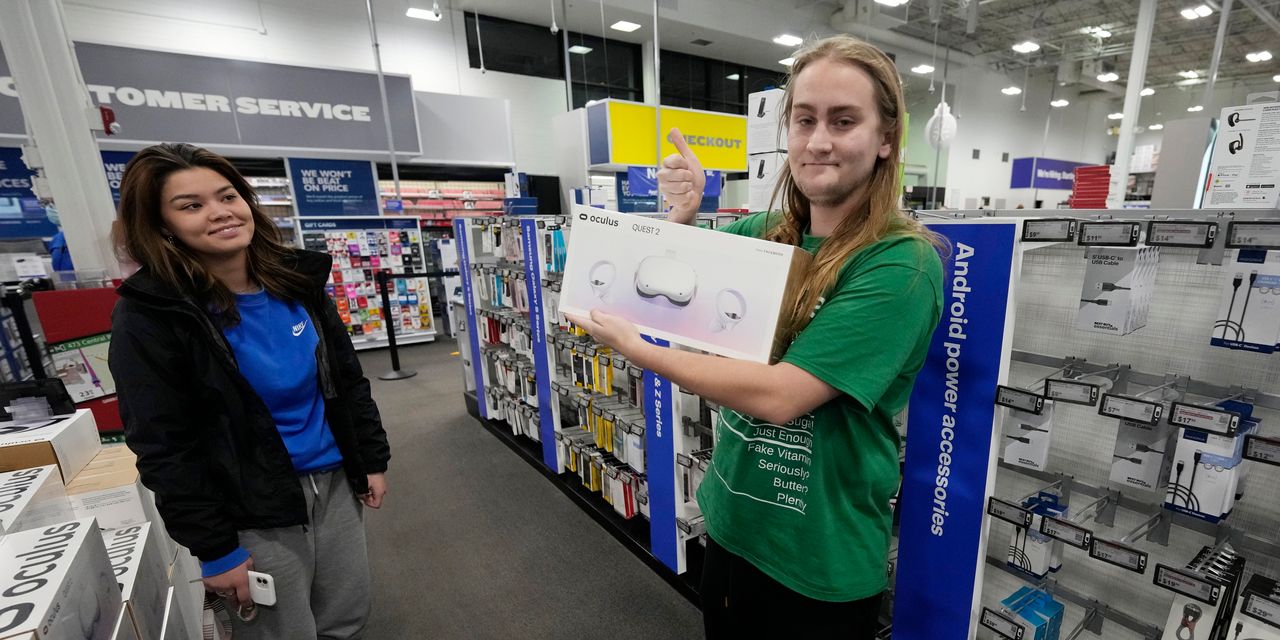 Among the drawbacks to Facebook’s recent rebranding as a “metaverse” company are that it is no longer enough just to make a solid videogame device.

The company now formally known as


appears to have had a decent holiday season for its Oculus VR headset. Analysts for KeyBanc Capital and Jefferies both noted in reports last week that downloads of the Oculus app jumped over Christmas;

of Jefferies added that daily active users of the app on Christmas Day were up 90% from the same day the previous year. Facebook has never regularly disclosed sales data for Oculus, which it acquired in 2014 for $2 billion. But IDC estimates that unit sales of the company’s VR devices in 2021 will come in between 5.3 million and 6.8 million, once the market research firm’s fourth-quarter data is finalized.

Either one would be a nice jump from the 3.5 million Oculus units estimated to have sold last year. And it is far better than the anemic sales from before the company put out its first Quest headset in mid-2019. Oculus devices before that mostly required a cable running to a high-powered PC. Such “tethers” have severely limited the appeal of VR devices even to the gamer crowd. Analysts estimate that

sold about 5.5 million units of its tethered PlayStation VR headset in the fiscal years 2019 to 2021, according to consensus estimates from Visible Alpha. That is equivalent to about 12% of the total PlayStation console units the company sold in that time.

has long made clear that his ambitions for Oculus go well beyond gaming, the company’s name change two months ago significantly raised the stakes on that bet. Proponents of the metaverse concept insist the idea is about more than virtual reality. But VR is one of the main technologies that would set such a virtual world apart from simply browsing the internet on computers and mobile devices. “Without VR, there is no presence. And presence is the key point,” said longtime VR market analyst Stephanie Llamas of VoxPop.

Hence, a company banking its future on the metaverse will have to get a lot more devices into a lot more hands. Estimated Oculus sales over the past five years amount to less than 3% of Facebook’s daily user base in North America and Europe—the two markets that account for the vast majority of its business. It also is anyone’s guess how many people who got a headset for Christmas will be anything but casual users. And some of the recent sales could have gone to Meta’s own employees trying to score some face time with the boss. The Wall Street Journal reported that Mr. Zuckerberg has been taking more of his internal meetings in virtual reality of late.

Facebook’s metamorphosis assumes that enough people will be willing to invest a few hundred dollars to plug into a virtual world controlled by a company with serious public trust issues now generating more than $110 billion a year in advertising revenue. Getting VR headsets under the Christmas tree may prove to be the easy part.

Write to Dan Gallagher at dan.gallagher@wsj.com

Appeared in the January 3, 2022, print edition as ‘Metaverse Needs More Than a VR Bump.’