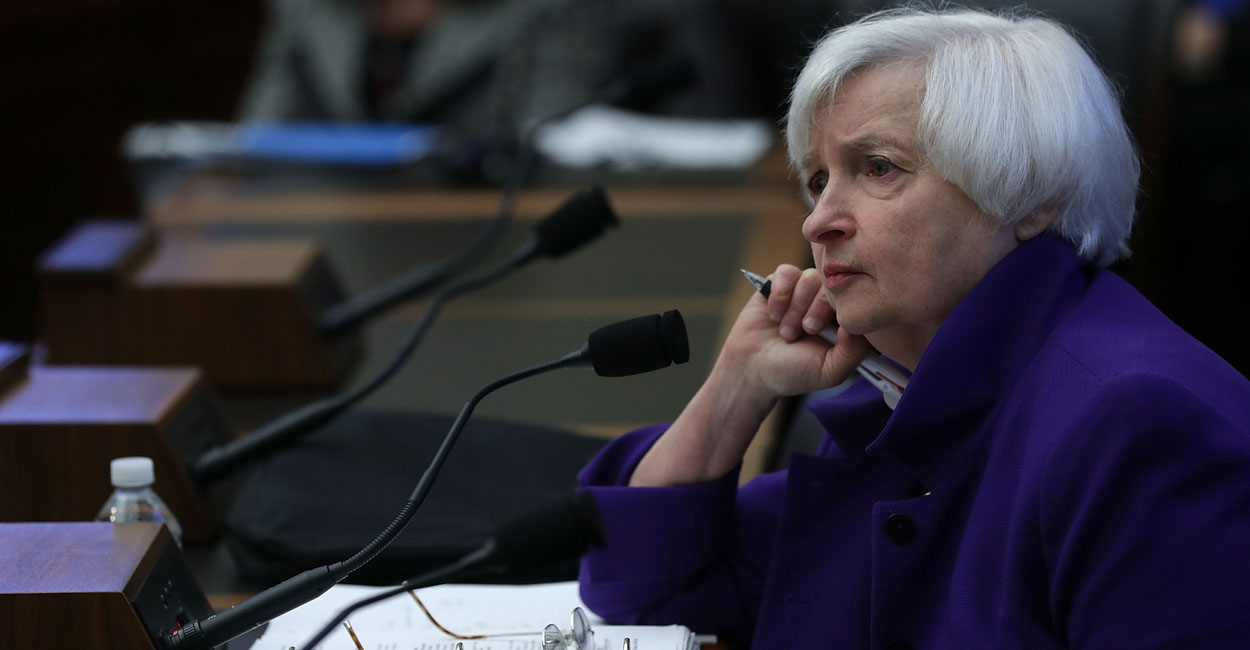 Treasury Secretary Janet Yellen is carrying out a desperate, last-ditch effort to sell the increasingly unpopular Build Back Better Act before the year ends.

Yellen sent a memo to the Senate Dec. 9 titled “Fiscal Responsibility and the Build Back Better Act.” She wanted to get ahead of major reports that delivered a one-two punch to the Democrats’ plan to increase taxes and dole it back out to friends of the party.

Despite repeated assertions of the bill being paid for, the nonpartisan Congressional Budget Office released a report showing that the temporary policies in the bill would increase deficit spending by $3 trillion. On top of that, inflation is hitting a 40-year high as consumer prices continue to rise because of out-of-control government spending.

As the Biden administration finds itself unable to escape the real economic consequences of its left-wing policies, Yellen in her memo swings blind with claims that are far removed from reality. Here are the following claims Yellen makes about the Build Back Better Act.

Claim 1: The Build Back Better Act is fully paid for in the first decade.

Fact Check: FALSE—The Congressional Budget Office shows that the Build Back Better Act is NOT fully paid for and will increase the deficit by nearly $400 billion.

Yellen states in her memo that the Congressional Budget Office and Joint Committee on Taxation support her claim that the Build Back Better Act would reduce deficits by $100 billion in the first decade.

However, the memo links to an older report that outright refutes that claim and estimates the bill will increase the deficit by $367 billion over 10 years. Even if potentially higher revenues that could result from additional IRS administrative funding is included (the White House-Congressional scorekeeping guidelines exclude these types of revenues because they are highly speculative), the bill would still increase deficits by $160 billion.

Furthermore, the Congressional Budget Office with the Joint Committee of Taxation, reports that the Build Back Better Act—without the smoke and mirrors of sunsetting new spending programs—would increase the deficit by $3 trillion over the first 10 years of its enactment.

Claim: The Build Back Better Act is a fully offset decade-long investment that will not add to near-term inflationary pressures.

The federal government has flooded the economy with more than $5 trillion in newly printed deficit spending since the start of the coronavirus pandemic. As a result, Americans are getting hit with rising price increases—the highest it’s been in 40 years. For example, gasoline prices rose by 58.1% in the last year while meats, poultry, fish, and eggs rose by 12.8%.

If passed, the Build Back Better Act will add another $792 billion in deficits over the next five years and only worsen inflationary pressures.

At the same time as this higher government deficit spending, much of which will be purchased by the Federal Reserve, the Build Back Better would add higher taxes on investment, new government mandates and regulations, expansions of welfare without work, and harmful energy policies, all of which will make labor shortages and supply chain problems worse, driving up prices. The result is more dollars chasing fewer good and services, the classic recipe for inflation.

Claim: The Build Back Better Act will reduce deficits by around $2 trillion over two decades.

Fact Check: FALSE—This claim is based on purposefully dishonest accounting gimmicks to hide the true cost of the bill.

The American people made it clear. There is no appetite for a hyper-partisan, $3.5 trillion tax-and-spend bill. The Biden administration and his negotiators went back to design a bill that hides the true cost.

This claim assumes that the tax hikes are permanent while the slew of socialist benefit programs are temporary. But as the old saying goes, “the closest thing to eternal life on earth is a government program.” Like the excessive number of federal housing, welfare, and insurance programs that currently exist, the programs under Build Back Better will continue forever and run massive deficits.

What the most recent Congressional Budget Office report reveals is that if the programs are made permanent—which is what Democrats consistently say they want—the bill would add $3 trillion to the debt in the first decade. It would almost certainly add trillions more to the debt in a second decade.

Claim: Given this bill’s offsets and the commitment of President Joe Biden and congressional leadership to pay for this and future legislation, it is inappropriate to judge this legislation based on an assumption that future acts of Congress won’t be paid for.

Fact Check: FALSE—The logic behind this claim is entirely incoherent.

Yellen claims that Biden and his Democratic colleagues in Congress are so fiscally responsible, that the public should just believe them when they say they are committed to paying for this bill.

However, the whole concept of the national debt—currently at $29 trillion and rising—is that it reflects Congress’s long history of being unable to pay for the spending it has promised. To point out that Congress will struggle to pay for future programs while adding trillions of dollars more to the ocean of debt is not unfounded.

Financing the spending promises of progressives would require higher taxes on middle-class families. Even Democrats have rejected a variety of tax hike proposals during their Build Back Better negotiations.

The spotlight is on, and the Biden administration is beginning to feel the heat. More and more families are being squeezed by the results of progressive policies. Instead of propagating cynical falsehoods to pass an agenda that will crush families and the nation, this administration needs to own up to the fact that this bill is too radical for the American people.

This is a moment where Americans need to hold its leaders accountable, call them out for broadcasting flagrant lies to hide its own failures, and stop them from committing more.