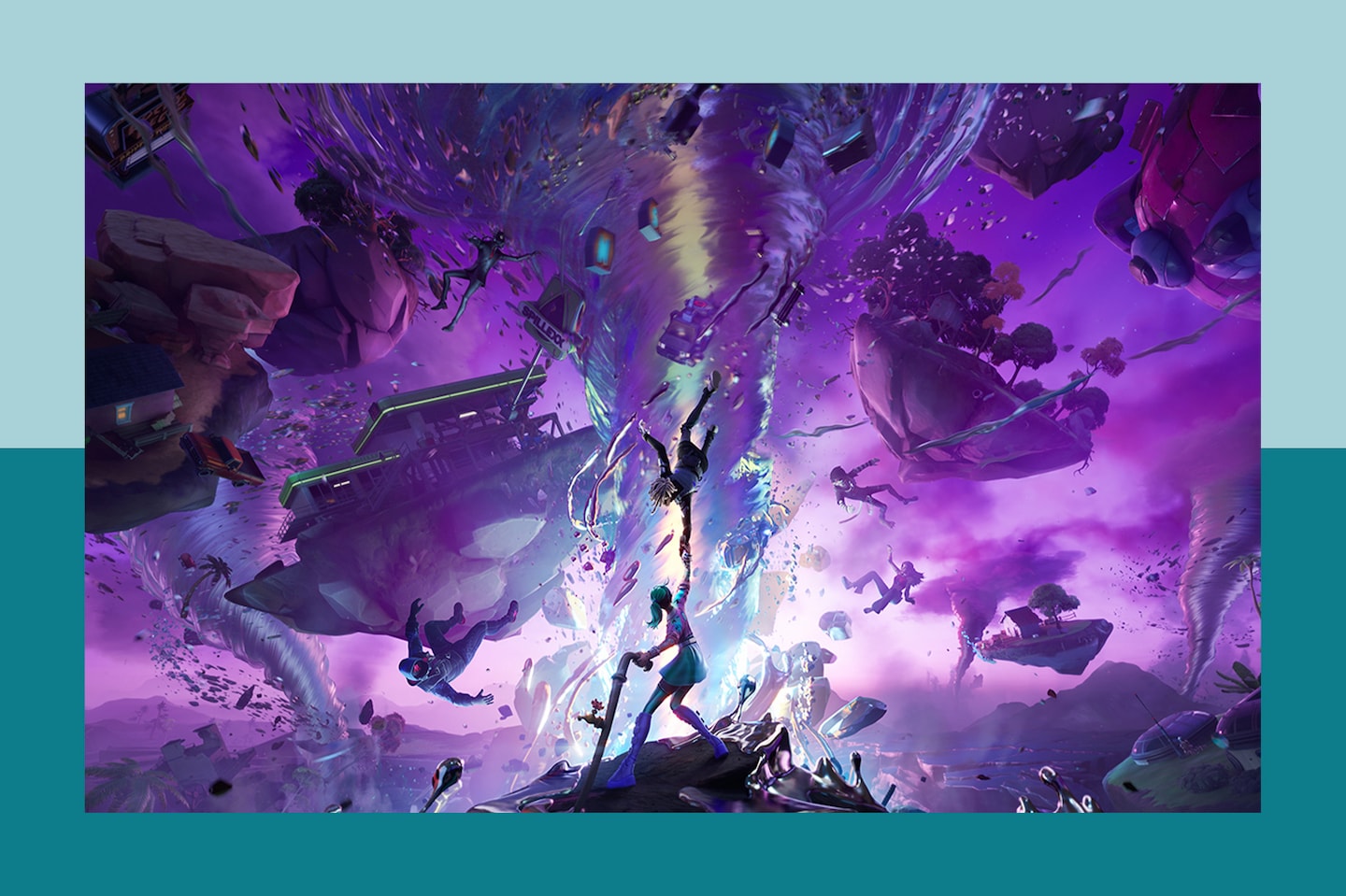 The event started at 4 p.m. Eastern time and lasted over half an hour. Players who queued up early found themselves on a small island adrift in space, with a television set showing the event countdown. The event began with a cinematic showing “Fortnite” characters facing off against enemy the Herald from a fortress in the Reality Tree (more on all the lore below), only to see the Herald transform into a huge chrome monster and explode the battle royale island and set players adrift in space.

From there, character Paradigm’s voice appeared, sucking players through the Zero Point and onto a fractured series of islands. Players were tasked with powering up the Zero Point by throwing fragments into it, which could be found around the area or earned by performing various tasks such as matching props, throwing chickens, or talking to computer-controlled characters while wearing certain costumes. Personally, I found it fairly confusing, as well as a bit of a tonal contrast from Paradigm’s dialogue about self-sacrifice and saving the world.

As the Zero Point powered up, new pieces of land were drawn in. They provided new tasks, as well as new fragments to find. There were also flashbacks that could be activated, which heavily featured the cubes from previous seasons’ plotlines.

Once the Zero Point was fully ready, players saw another cinematic, where various familiar characters, props, and skins from previous seasons were sucked into the Zero Point. The battle royale island reconfigured, and players were kicked back to the starting area, with the island floating in the distance.

Trying to log back into the game currently gives me an error, so it seems that — as is common after finale events — “Fortnite” is offline. There’s no indication when things might come back online.

Season four saw a lot of changes to “Fortnite’s” island, as a mysterious chrome substance overtook points-of-interest, seemingly controlled by the nefarious Herald. At the beginning of the season, character Paradigm escaped the spreading chrome and made her way to Reality 659 via the Zero Point, the source of much of the game story’s reality-hopping drama. The season’s story unfolded largely through geographical changes and tasks that came as part of the game’s battle pass. The player could help characters Jones and AMIE (character The Scientist’s AI) communicate with Paradigm and send information that could help her defend reality in the chapter finale. Some of this communication was done via the roots of the Reality Tree, the once-flourishing representation of the Zero Point that was dead this season.

Meanwhile, battle pass character Bytes had a story of their own. By following in-game quests while wearing their skin, Bytes slowly partnered with the evil chrome-related entity called The Nothing to become a warrior for The Last Reality, a long-standing story enemy with ties to the cubes that overtook “Fortnite’s” island in previous chapters. That would explain the cube flashbacks in the Fracture event, which perhaps signal what’s to come in the game’s next chapter.

(If you’re currently scratching your head and saying “I thought ‘Fortnite’ was that game with the silly dances,” have no fear, it’s still that. But over the course of its five years of existence, it’s spawned a plotline to rival any sci-fi epic.)

‘Fortnite’: Battle royale, concert venue and, maybe, the start of the metaverse

Though Chapter Three was “Fortnite’s” shortest chapter, it brought many big changes to the gameplay. It added sliding, mantling and a faster movement speed, letting players get around the map in new ways. Season Two briefly removed building — the mechanic that sets “Fortnite” apart from its battle royale competitors — from the main game; it later returned as its own game mode. The no build mode lets players eliminate each other without the pressure to gather materials, but also without the ability to create their own cover when they come under fire. The latest season let players phase through chromed walls and transform into fast-moving chrome blobs to surprise enemies. And as ever, we saw crossover characters from universes like Star Wars and Marvel, continuing “Fortnite’s” transformation into a franchise-filled metaverse.

While big story events to cap off seasons and chapters were once a “Fortnite” mainstay, they’ve grown less consistent over the years. Arguably, “Fortnite’s” most famous finale event was the black hole that took the game offline for several days at the end of Chapter One in 2019. These events tend to be popular with players, providing graphical spectacles, a break from the usual battle royale gameplay and — as we saw again today — lots of lore for fans to dig into.