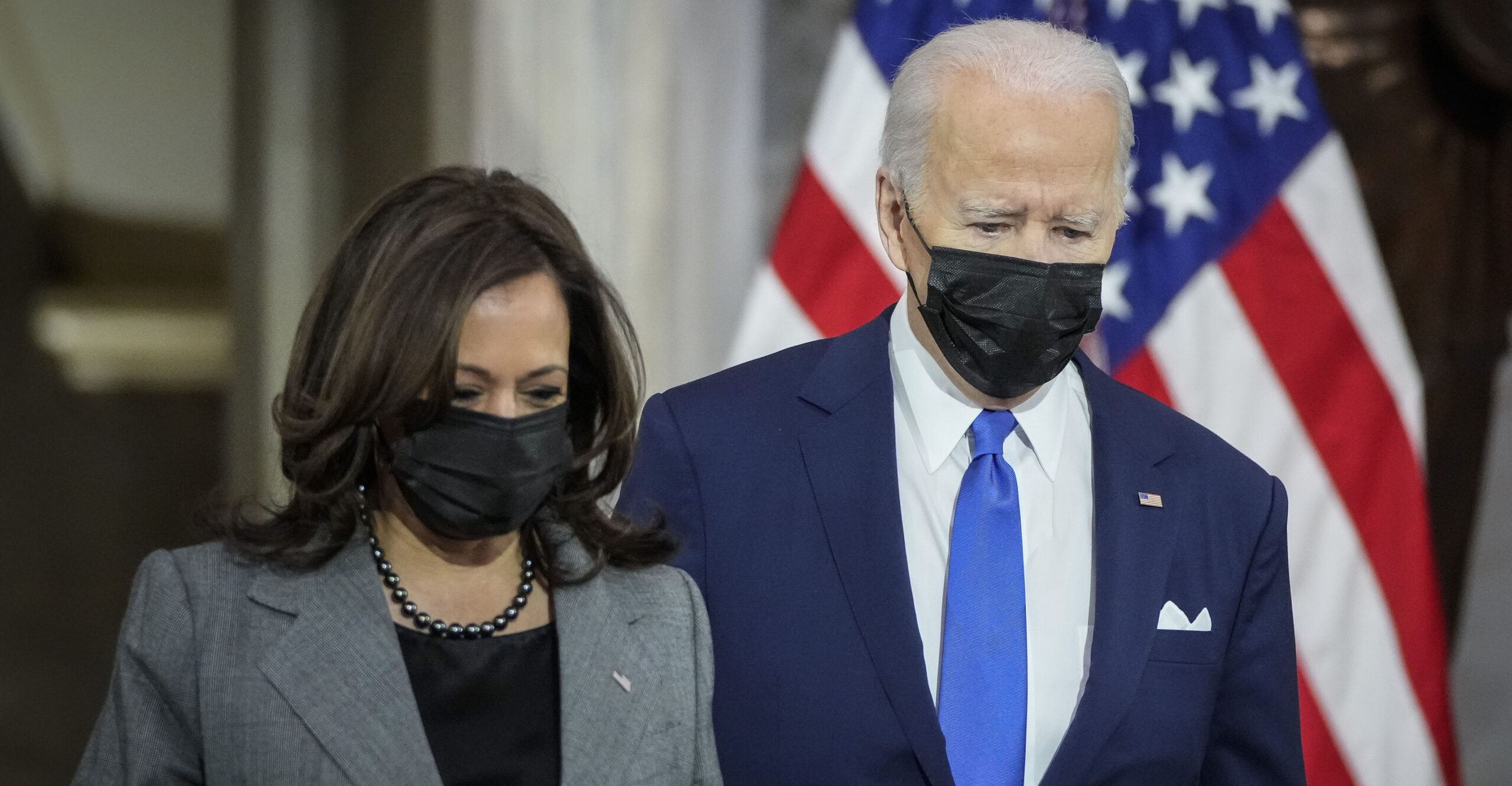 Marking the one-year anniversary of the assault on the Capitol, President Joe Biden repeatedly called his predecessor, Donald Trump, a “defeated” former president who “can’t accept he lost” and referred to him as a “self-seeking autocrat.”

Ahead of the president’s remarks, Vice President Kamala Harris compared the Jan. 6, 2021 riot—in which hundreds of Trump supporters stormed the Capitol in a bid to prevent Congress from certifying the results of the 2020 election—to Pearl Harbor and the 9/11 terrorist attacks.

Biden and Harris delivered their remarks in Statuary Hall at the U.S. Capitol on Thursday morning, to mark the year since the shocking event that led to Trump’s second impeachment on a charge of “incitement to insurrection.”

The president and vice president made some big statements along the way. The following is an analysis of the accuracy of four of those claims.

1) ‘Most Significant Test’ Since Civil War

Biden said the riot represented a threat to democracy.

As for being a comparable threat, that’s more questionable. The Civil War came about after Southern slaveholding states attempted to break away from the United States and form a separate country.

The fledgling Confederate States of America raised its own military in an armed rebellion that wore on for four years and took the lives of more than 600,000 troops.

Harris put Jan. 6 in league with days that will live in infamy.

“Certain dates echo throughout history, including dates that instantly remind all who have lived through them where they were and what they were doing when our democracy came under assault,” Harris said. “Dates that occupy not only a place on our calendars, but a place in our collective memory: Dec. 7, 1941; Sept. 11, 2001; and Jan. 6, 2021.”

The Japanese attack on Pearl Harbor in December 1941 killed 2,403 Americans. The 9/11 terrorist attack on the World Trade Center and the Pentagon and in rural Pennsylvania killed 2,997 Americans.

Reportedly, only two people died directly from the violence on Jan. 6, 2021. But as many as seven others died indirectly from the events of the day, based on a tally of deaths published this week in The New York Times.

Rioter Ashli Babbitt was fatally shot by a Capitol Police officer when she was trying to break through a door. Another rioter was reportedly stampeded by fellow rioters.

Others died of natural causes or suicide, but the stress from the violence and commotion of the day could have contributed to those deaths. About 140 police were reportedly injured in the rioting.

Capitol Police Officer Brian Sicknick, initially thought to have died from an attack, actually died of natural causes. But the stress from the day’s events could have prompted his strokes.

Throughout his speech, Biden did not refer to Trump by name, but continuously blamed the riot on “a former president.”

Trump continues to contend the election was neither free nor fair.

Other critics who did not question the outcome nonetheless did raise concerns about large-scale mail-in voting, as well as private money from Facebook founder Mark Zuckerberg funding election administration, primarily in heavily Democratic-leaning areas, with the potential to affect the outcome.

However, a Washington Post analysis in February found that flipping fewer than 43,000 votes across three states—Arizona, Georgia, and Wisconsin—could have changed the election outcome by creating an Electoral College tie and sending the race to the House of Representatives.

In a bid to ensure the events of a year ago weren’t shrugged off, Biden insisted, “This wasn’t a group of tourists. This was an armed insurrection.”

Trump has said there were “no guns whatsoever.”

Whether the rioters were armed has been disputed, and that’s perhaps based on a definition of “armed.” Several were carrying pepper spray or bear spray, and wielding flagpoles as clubs in attacking law enforcement officers.

Meanwhile, at least three rioters were charged with having firearms “on Capitol grounds” or stashed nearby, meaning not necessarily inside the Capitol, the Austin American-Statesman reported.

Arms aside, so far, federal prosecutors have not charged any of the rioters with insurrection.

The term “insurrection” has a legal definition and a dictionary definition that don’t correlate with what occurred on Jan. 6, Jeffrey Scott Shapiro, a former assistant attorney general, wrote this week in The Wall Street Journal.

He noted that most of those who were arrested have been charged with violating 18 U.S.C. 371, which makes it a crime “to commit any offense against the United States, or to defraud the United States.” That includes civil disorder, disorderly conduct, entering and remaining in a restricted building or grounds, destruction of government property, and obstruction of an official proceeding.

“[N]ot one defendant is charged with insurrection under 18 U.S.C. 2383,” Shapiro wrote. “That’s because insurrection is a legal term with specific elements. No prosecutor would dare mislabel negligent homicide or manslaughter a murder, because they are totally distinct crimes. The media [have] no legal or moral basis to do otherwise.”

He continued: “The events of Jan. 6 also fail to meet the dictionary definition of ‘insurrection,’ which Merriam-Webster defines as “an act or instance of revolting against civil authority or an established government.” A usage note adds that the term implies “an armed uprising that quickly fails or succeeds.”