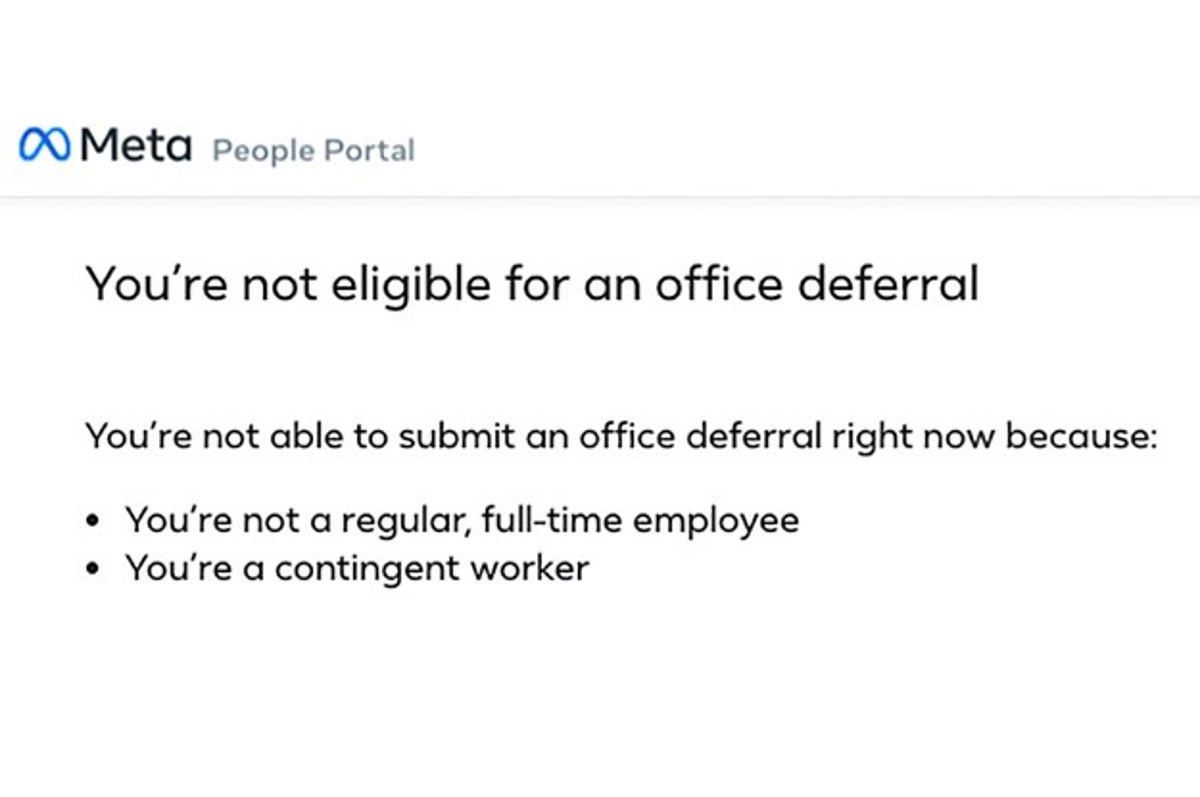 Hundreds of Facebook contractors who were ordered to return to the company’s Mountain View campus this month amid an unprecedented spike in COVID-19 cases were told today that they can continue working from home, an abrupt reversal of a company mandate.

Following a BuzzFeed News inquiry, Accenture, a subcontractor that manages content moderation for Facebook, walked back its late December demand that moderators return to work in Mountain View on Jan. 24. The policy change was set against a backdrop of worker dissent as contractors openly questioned why they had to report to the office when full-time Facebook employees could defer their return by several months. Multiple moderators threatened to resign if health exemptions continued to be denied for vulnerable contractors.

Contractors were told verbally on Wednesday morning that the return to work was being delayed.

In response to a detailed list of questions, a spokesperson said that given current health data “we have let our team members working from home know they should continue to do so.”

“We work collaboratively with our people on individual accommodations, including work from home, in compliance with all applicable employment laws and local regulations,” the spokesperson added.

In a late December staff call, Accenture told a team of hundreds embedded at one of the social network’s California headquarters that they must return to the office on Jan. 24. Employees who subsequently requested special consideration for being immunocompromised or protecting vulnerable family members were not given exemptions. “Once the return to office is complete for Meta, there unfortunately will not be work that can be done from home on this project,” those who inquired were told in a boilerplate email. The announcement came just weeks after Facebook’s parent company, Meta, told full-time employees that they could defer their return to work for three to five months amid a flurry of similar actions by companies like Google and Apple.

Accenture’s return-to-office mandate would have affected a building of roughly 400 people tasked with reviewing and flagging for removal the worst of what’s posted to Facebook. Some said the decision underscored the lesser treatment of Facebook contractors.

“It’s unconscionable and I’m just sick of it,” one contractor told BuzzFeed News, speaking on the condition of anonymity as they are forbidden from speaking publicly about Facebook or Accenture matters.

In response to a series of detailed questions, a Meta spokesperson said the company will “continue to prioritize everyone’s health and safety” as it works to get teams back into the office.

Contractors claim quarters are too cramped to properly social distance. (Previously, moderators worked out of two buildings leased by Facebook, but as of last year were consolidated into a single facility.) One contractor told BuzzFeed News that Accenture’s COVID protocols require them to remain 3 feet apart at all times. “But that’s a lie because each desk is 1 foot apart,” they said. Workers are also concerned about using elevators, which are limited to four people at staggered intervals but are workers’ only mode of traveling between floors, as stairwells have been completely closed off. One contractor said the elevator limits are not really being enforced. Facebook and Accenture both declined to comment on these matters.

Internal emails viewed by BuzzFeed News show that several Facebook contractors tested positive for COVID in December. As of Monday, the number of cases was reportedly as high as 34 people. Contractors said they only learned about the total number of cases by talking to their coworkers, as communications regarding infections are limited to affected floors. Facebook and Accenture declined to comment on the number of COVID cases among contract workers.

Contractors told BuzzFeed News that COVID sick leave, which entailed two weeks of regular pay for employees who tested positive for the virus, stopped being offered in September. Facebook contractors in Mountain View also do not receive hazard pay, and in October 2020, hundreds of Facebook workers signed a petition demanding paid leave for moderators at the company’s Austin offices, Motherboard reported.

On internal company message boards viewed by BuzzFeed News, Facebook employees and contractors criticized Accenture’s handling of COVID infections in its offices and lack of sick leave for moderators. Workers expressed confusion over how to alert the company should they test positive for COVID and objected to being told to use personal vacation hours to recover.

The US set a global record on Monday with 1 million new COVID cases reported in a single day. In California, the state’s Department of Health reported more than 230,000 new COVID cases on Tuesday.

Prior to Accenture’s policy change, nearly a dozen contractors publicly and privately expressed their intent to resign rather than return to work. Contractors told BuzzFeed News that Accenture and Facebook were unresponsive to their requests for personal exemptions.

“Regular Facebook employees can go back at their leisure,” one contractor said. “Contractors, as always, know they’re treated as second-class citizens.”

With the H-1B lottery looming, how should we approach overseas hiring? – TechCrunch