An error-filled letter from a Virginia teachers union calling for increased protections against the coronavirus was mocked relentlessly on Twitter after an appalled parent took a correction pen to the piece and posted the revised version online.

‘Hey @VEA4Kids, are you going to send out more of these grammar worksheets over break?’ parent Ellen Gallery wrote Thursday morning, in a post that featured the heavily marked-up document sent by Arlington Education Association President Ingrid Grant.

‘My kids and I had a great time spotting errors! Did we find them all?’ the mom quipped.

Gallery, who describes herself as a home-schooling mom, marked up roughly 20 grammatical errors highlighted in green pen in a letter Grant sent to Arlington Schools Superintendent Dr. Francisco Duran to increase the amount of on-site COVID tests for schools in the Virginia district.

The letter was only five paragraphs long. 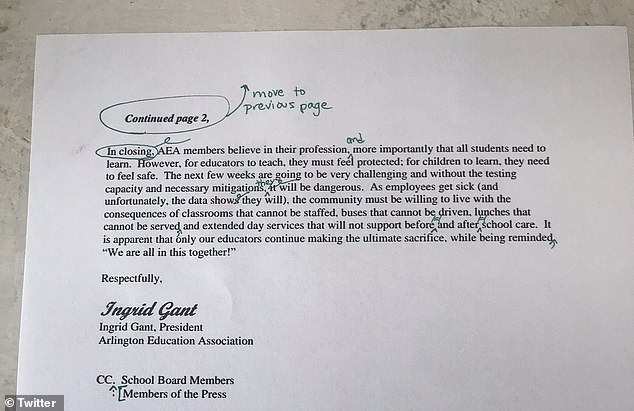 Despite only being five paragraphs long, the missive, penned by Arlington Education Association president Ingrid Grant, contained approximately 20 errors, highlighted by the edits made in green pen

The contents of the letter attempted to address the recent spread of the coronavirus amid the surging Omicron variant, and demanded a delay to the resumption of classes in January to address the issue, until school testing capabilities are increased. 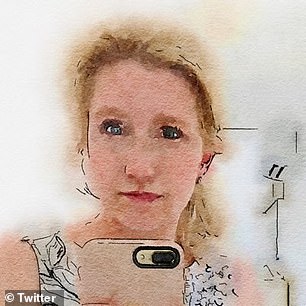 Virginia was one of 15 states to report a record-high number of average daily infections, according to the CDC.

Arlington in particular is a noted hot spot, seeing an average of 163 cases each week, as of December 28.

In her letter, which boasts extraneous punctuation and a slew of incoherent sentences, Grant goes on to argue that allowing students to eat lunch indoors in the midst of the rash of cases serves as a ‘super-spreader’ for the surging virus.

Grants adds that teachers are subsequently having to make the ‘ultimate sacrifice’ as Omicron cases multiply, and urged Duran to not rush Arlington public school students back to the classroom. 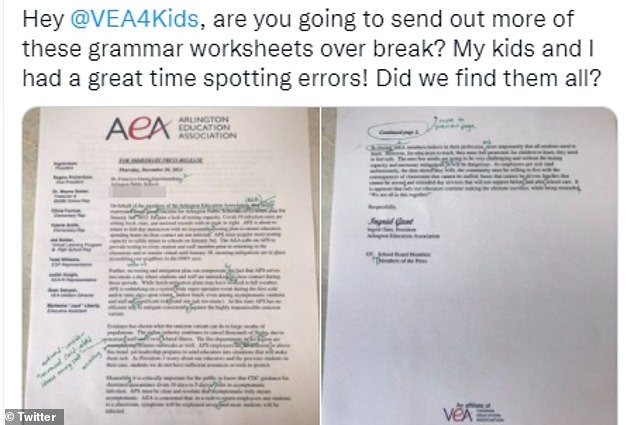 In her letter, Grant goes on to argue that allowing students to eat lunch indoors in the midst of the rash of cases serves as a ‘super-spreader’ for the surging Omicron variant 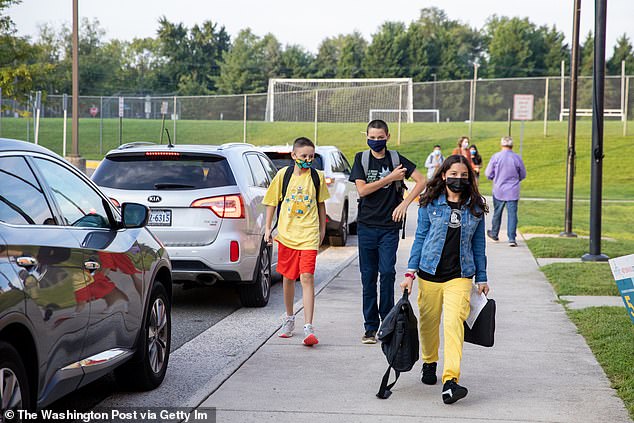 Virginia public school heading to their first day of classes in August. Fifteen states reported a record-high number of average daily infections, per the CDC, with Virginia being one of them

Her command of the English language in the piece, however, left much to be desired, with de facto editor Gallery completely reworking the letter’s opening sentence.

‘On behalf of the members of the Arlington Education Association, this dire expression lends great concerns for Arlington Public Schools return plans for January 3rd, 2022,’ the letter originally opened.

Grant then goes on to mistakenly use the word ‘are’ instead of ‘our,’ in the awkwardly written piece.

‘The fire departments in are region are exemplifying domino outbreaks as well,’ she wrote, referring to surging Omicron numbers in the Old Dominion.

In response to the gaffe, Gallery derisively quipped: ‘My kids couldn’t write small enough to correct this letter but we shared some laughs and created this,’ referencing her revised version of the letter.

‘I’d recently taught the 6yo about homophones, so the are/our mistake really cracked him up. 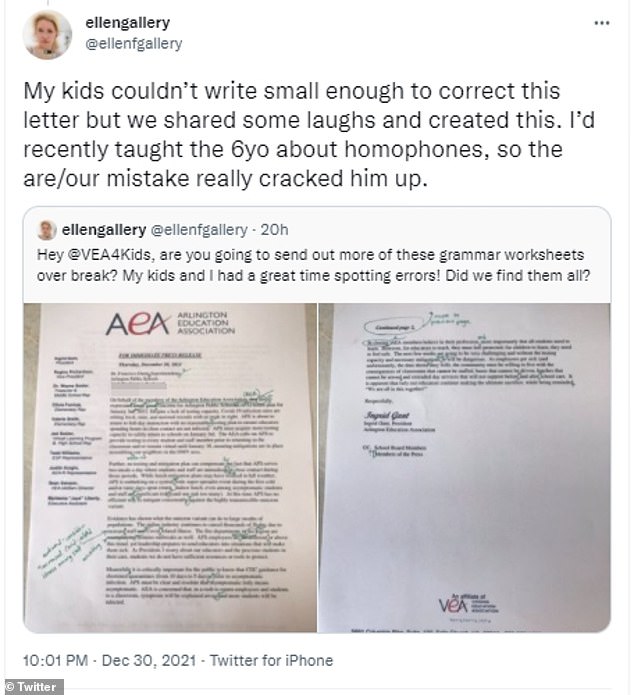 The letter featured a slew of glaring linguistic errors, like using the word ‘are’ instead of ‘our’

Twitter was quick to react to the poorly penned missive.

‘Apparently “learning loss is not limited to students!’” one user wrote in response to the post, which has garnered hundreds of likes and retweets as of Friday morning.

The U.S. hit a new high for daily COVID cases with 512,533 average cases reported on Thursday, breaking its previous record of 489,267 reported on Wednesday, according to a DailyMail.com analysis of John Hopkins data.

The fact that deaths and hospitalizations are not rising at the same pace as positive cases show how the Omicron variant is less severe than Delta and more patients are experiencing milder cases.

Some cases may not even be making the official count because of the rise in at-home tests. What’s more worrisome about the high numbers is that health experts often expect disturbances in testing and data reporting, the news outlet reported. 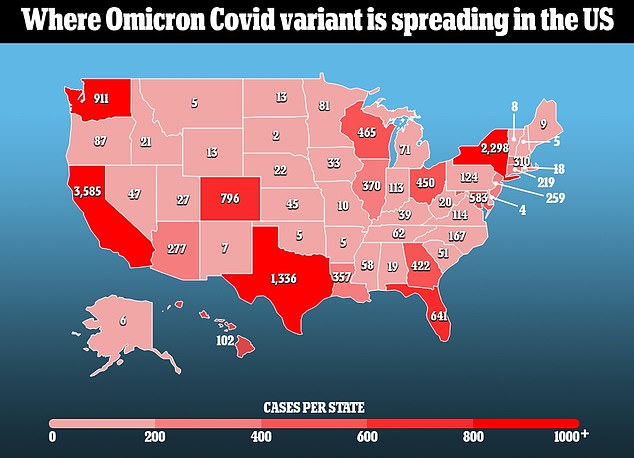 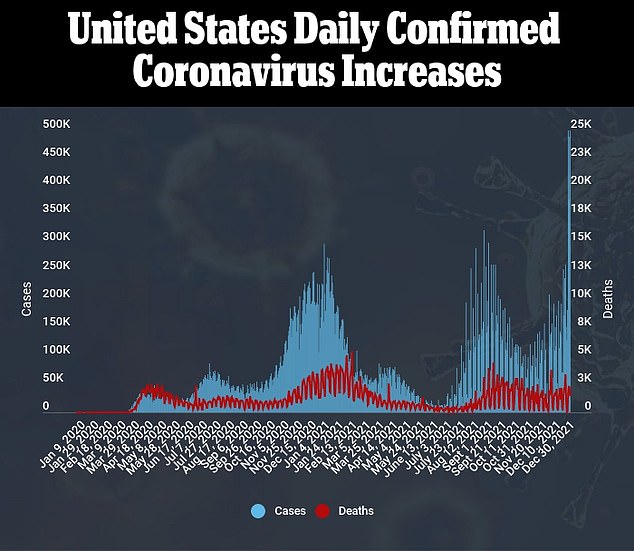 The US broke a world record for average daily COVID cases for the second day in a row with 512,533 reported on Thursday, according to a DailyMail.com analysis of John Hopkins data

Fireworks and celebrations from around the world