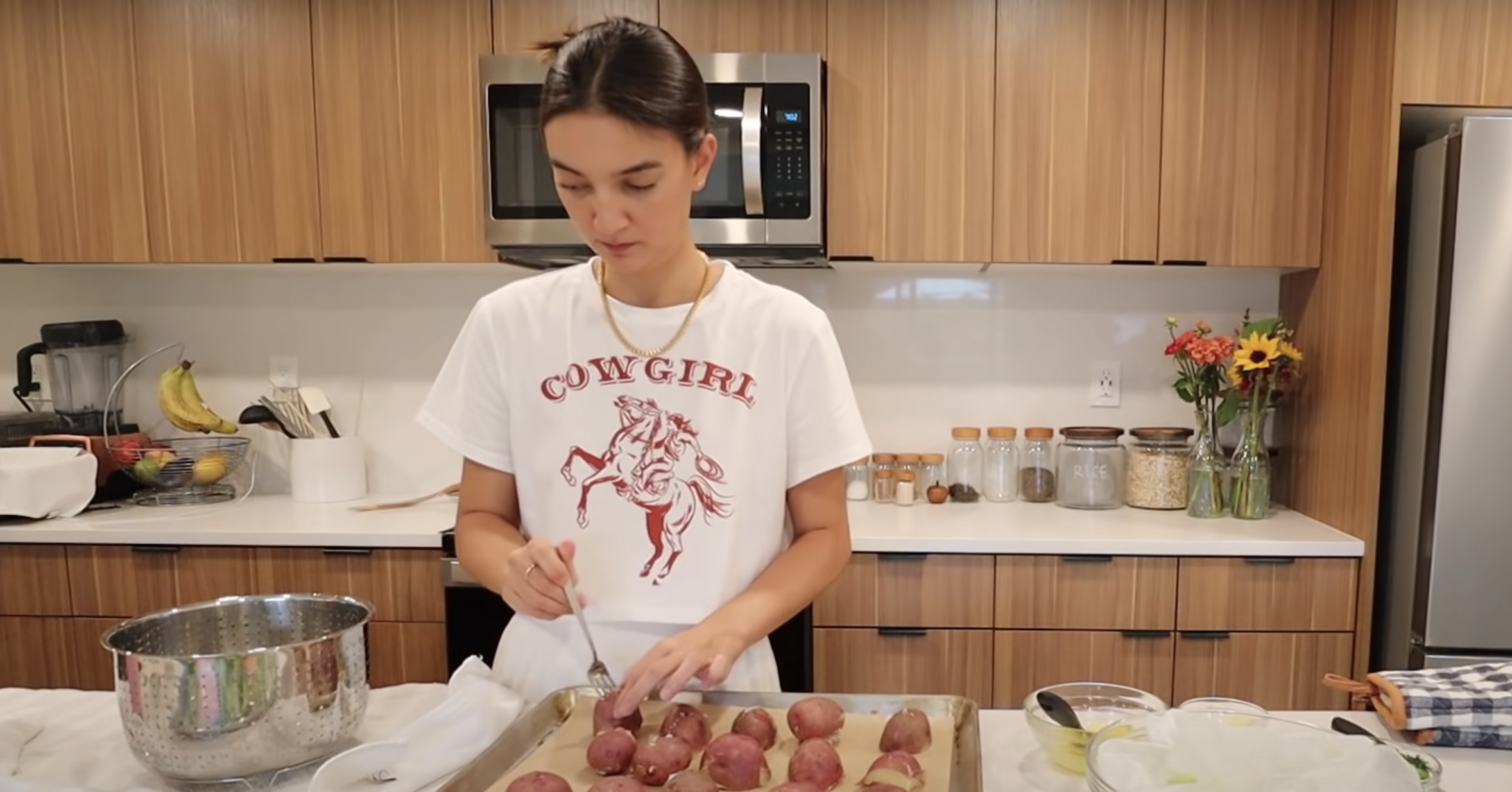 My initial reaction when I first watched this extremely viral video of TikTok lifestyle creator Emily Mariko making salmon rice was not to wonder if I should cook the dish myself. Instead, I was surprised that she was using white rice. And real mayo?

When I was coming up on the internet, the “healthy” lifestyle creators I followed did not eat white rice. Or bread. Or many of the things Mariko is now becoming so famous for consuming.

If you’re unfamiliar, Mariko produces lifestyle videos on TikTok that are compelling in their simplicity. She cuts vegetables for meal prep, makes tomatoes on toast with cream cheese, or eats a pie. Mariko, who lives in the Bay Area, always looks polished and beautiful but never overdone, wearing simple crop tops with leggings or jean shorts and big sweatshirts.

Mariko says on her YouTube channel that her content is about “looking and feeling your best.” Her recipe videos are filled with ASMR sounds of chopping, washing, and cutting, and end with beautiful plates of food. She also posts videos of herself doing chores and running errands, like washing her sheets and going to the farmers market. Somehow, in her world, these mundane tasks look whimsical. Mariko’s videos are like getting a head massage that also makes you want to go buy some kale or scrub your toilet.

Mariko is certainly not the only lifestyle content creator on TikTok or the internet. Aspirational lifestyle content is as old as social media itself, and there are plenty of people making similar content on a variety of platforms (just type in farmers market haul on any of them, and the amount of videos you could view is limitless). But Emily’s careful blending of recipes, organization tips, and attainable and unassuming luxury, along with ear-tingling ASMR, have made her a lifestyle star of new proportions for TikTok. Her content has exploded on the platform in a truly mind-blowing way.

As Kate Lindsay wrote in her Embedded newsletter, Mariko had 70,000 followers on TikTok at the beginning of September, after years of creating content mostly on other platforms like YouTube and Instagram. Now she has 3.9 million TikTok followers. The salmon rice video, published a week ago, has more than 25 million views.

Mariko is 29, but her fanbase is Gen Z, with some millennials thrown in. Scrolling through her comments, many of them appear to be young women in their late teens or early 20s, who write that they have been inspired to learn to cook or meal prep because of Mariko’s videos, and ask her for advice as to how to live a more “healthy” lifestyle themselves. “What motivates you to be active and eat so well, and how can we be motivated to do that?” one commenter asked her recently. “Emily Mariko honestly revitalised my love for life. I just did a grocery restock, organized my kitchen and had a healthy meal,” wrote another on Twitter. As Lindsay writes, Mariko “shows up for herself every day with a clean kitchen, nutritious food, and other content that is aspirational and would be entirely accessible, if I just got off of my ass.”

But scrolling through Mariko’s comments, I was struck by the example she is setting for her followers, and how that differed from what I saw online as a young adult.

When I was in my early 20s, I also wanted to live my best life, and searched for it online. I wanted to learn to cook for myself, but in a healthy way, whatever that meant. I soon stumbled upon what came to be known as “healthy living blogs,” or “HLBs,” a genre of blogs that had a chokehold on my corner of internet culture in the early 2010s. The most popular of these blogs, like Healthy Tipping Point and Kath Eats Real Food, all had a few key characteristics. They were thin white women, most of them ran marathons or at least half-marathons, nearly all of them were married to their college sweetheart, and they all had a strange, in hindsight, obsession with oatmeal.

Most HLBs also had a similar backstory: After gaining a “few too many” pounds in college and feeling sluggish and out of shape, the blogger had dedicated themself to self-improvement. The weight fell off, and through exercise and healthy habits, they said they were now living their best life. By documenting their daily eats (some would post a photo of everything they ate for breakfast, lunch, snacks, and dinner every single day), the author provided a blueprint for how to eat like them. The blogs included recipes, workouts, grocery lists, and advice for how to eat “clean” at restaurants. They sang the praises of healthy and creative foods like overnight oats, zucchini noodles, and spaghetti squash (many of which now you can find premade at most grocery stores).

Many of the blogs featured great advice, some of which I still remember and adhere to today. Some of the bloggers, like Anne Mauney of Fannetastic Food, walked readers through their journeys to become registered dieticians. I still follow many of the people I followed back then on Instagram and have learned helpful tips over the years.

However, HLBs were a far cry from the food freedom that Mariko embraces in her TikToks. “Healthy eating,” I learned from them, required certain rules. The bloggers shared recipes with substitutions meant to eliminate fat, oil, and carbs. One of the most popular food bloggers of the era was Gina Homolka of SkinnyTaste, who provided the calorie, fat content, and Weight Watchers points for every recipe she posted.

It was on these blogs that I first read about using black beans or chickpeas to make brownies, that nutritional yeast tastes just as good as cheese, that powdered peanut butter is awesome, and that cauliflower can become literally anything if you try. Some ingredients were acceptable, and others weren’t: There were fats that were OK to consume as they were (nut butters, avocados), but others were to be avoided and swapped out for the aforementioned substitutions. The bloggers were telling me it was all right to have treats every once in a while, but when they seemed to only eat chickpea brownies and cauliflower pizza slices, it was hard to believe them.

Some of the other habits the bloggers touted were also concerning. As Marie Claire reported in 2010, some of the bloggers’ recommendations drew rebukes from nutrition experts who pointed out how harmful some of their advice could be. “The sheer number of food images and intense exercise descriptions can be particularly triggering to eating-disorder-prone followers,” one psychologist wrote at the time. (Many of the bloggers featured in the article published posts afterward slamming the author, arguing that she had mischaracterized their work and denying they had disordered eating or exercise habits.)

I don’t mean to imply that I personally felt harmed by reading these blogs or that I developed any bad eating habits from them. In truth, I mostly was too lazy and too cheap to commit to cooking elaborate meals for myself (22-year-old me did not have the patience to spiral a zucchini for noodles), so I was mostly a window shopper rather than a consumer.

I also think many of these blogs were reflections of the culture around diet and weight loss at the time. Some of the blogs are now defunct, but many bloggers have continued to work as influencers, and have evolved over time. Writing about her past as a healthy lifestyle blogger in 2017, Jen Eddins of the blog Peanut Butter Runner admitted that she had gotten caught up in many of the wellness fads of the community to the detriment of her relationship with food. She wrote of giving up red meat, swapping soy milk for dairy, and avoiding bread under the guise of health, even though she has no food allergies. Over time, she said, she was able to shake the bad habits she had developed and find “food freedom.”

“I’ve really come to the conclusion that I function best when I focus on fueling my body intuitively and with no rules,” she wrote.

Mariko then seems to be an indication of how much wellness content has evolved, and I’m heartened to see that the next generation has a lifestyle and wellness influencer who is more balanced than the ones I subscribed to. Mariko is thin and beautiful, and any influencer who presents their lives in an aspirational light runs the risk of presenting a filtered version of reality to young followers. But her videos are refreshing.

Mariko eats a lot of fruits and vegetables, but she also eats pastries and bread, white rice, mayonnaise, butter, full-fat cream cheese, ice cream, and peach cobbler. Even more exciting is the fact that she doesn’t apologize for it or even explain it.

Mariko is all about feeding your body whole foods that satisfy you and enjoying treats in moderation. In her videos, there’s no calorie counting, no forbidden ingredients, or guilt-inducing rules governing what she decides to eat. There’s no cauliflower or low-fat swaps. She may be an aspirational lifestyle influencer, but as far as I can tell, the lifestyle she is preaching is a much less harmful one than previous iterations.

Diet culture will always be with us, but I’m encouraged by Mariko’s rise. After all, everyone could use a reminder to slow down, take care of themselves, and eat a good meal. ●

What’s left to learn from Theranos? Have friends. – TechCrunch

Why Tesla Soared as Other Automakers Struggled to Make Cars