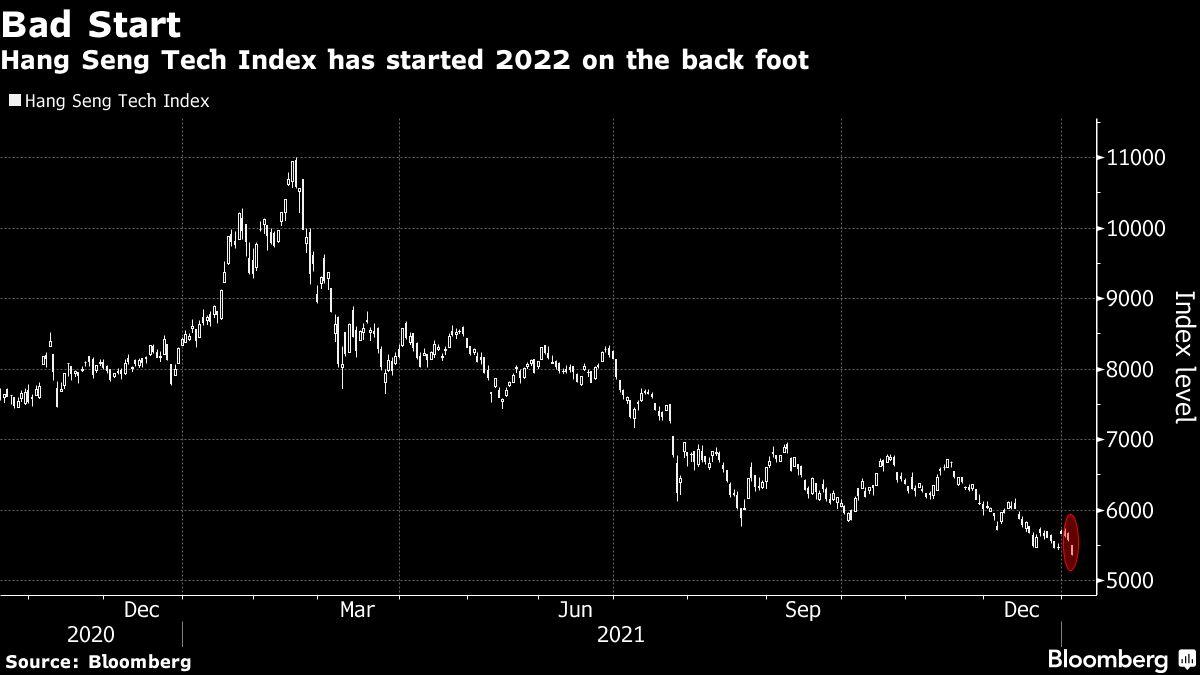 (Bloomberg) — China’s tech stocks fell once again on Wednesday as firms backed by Tencent Holdings Ltd. came under pressure after it pared investment in the cohort for a second time in two weeks.

The Hang Seng Tech Index fell 4.6% — the most since July — in a third straight day of declines, with overnight weakness in U.S. peers also weighing. The gauge closed at lowest since its inception in mid-2020 with Tencent investees Bilibili Inc., Meituan and JD.com Inc. among the biggest losers.

The Chinese tech giant cut its stake in Singapore’s Sea Ltd. on Tuesday — selling $3 billion of shares — sparking concerns of similar actions at other firms amid Beijing’s regulatory crackdown. U.S. tech shares also fell overnight as traders trimmed bets on stocks with extended valuations amid a rise in Treasury yields.

Tencent’s move is aiding expectations that the firm and its rivals may pare holdings as Beijing punishes the country’s tech giants for anti-competitive behavior, including maintaining closed ecosystems that favor certain firms at the expense of others. Last month the company said it plans to distribute more than $16 billion of JD.com’s shares as a one-time dividend.

“China’s anti-monopoly rules and regulators’ concerns about data privacy as well as web security may lead to more divestment in the country’s internet space in the coming months,” Bloomberg Intelligence analyst Cecilia Chan wrote in a note.

Tencent controlled a portfolio of investments worth $185 billion at the end of September, Bloomberg Intelligence estimates.

“China is at the stage of implementing many tightened policies and rules that the government announced last year on the technology sector,” said Linus Yip, a strategist at First Shanghai Securities. “The range-bound trading and heightened volatility may last through the first quarter.”

The Tokyo Stock Exchange Mothers gauge, which tracks shares of small- and medium-sized software-technology companies, dropped 5% to the lowest since May 2020.

Even Alibaba Group Holding Ltd., which initially rose nearly 2% on news that a Charlie Munger-associated company nearly doubled its holding in the e-commerce giant in the last quarter of 2021, closed 2.1% lower.

The declines in tech and other stocks in Hong Kong widened in the last hour of trading after the city tightened rules to curb the spread of the omicron variant. The Hang Seng Index closed 1.6% lower to mark its biggest drop in more than two weeks