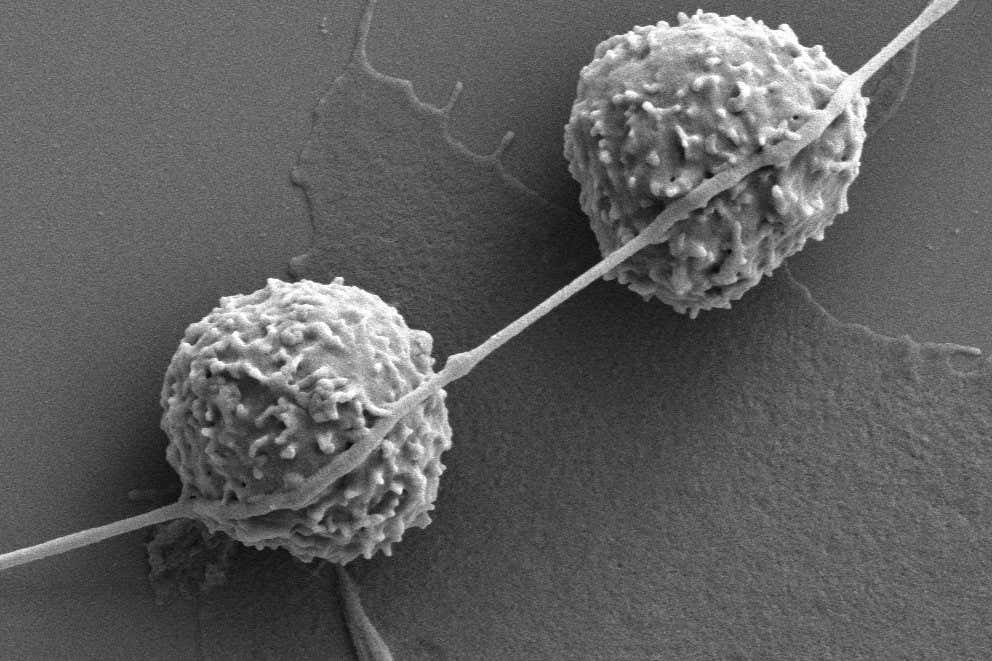 Cancer cells can boost their own growth by stealing energy-generating parts from nearby immune cells.

We already knew that some cell types grow nanotubes, tentacle-like structures made of a protein called actin. The nanotubes can let one cell link itself to another so the two can transport components including mitochondria – energy-generating structures – between them.

Now we have our first evidence that cancer cells can do something similar, using nanotubes to hijack mitochondria from two types of immune cells called T-cells and natural killer T-cells, both of which can kill cancer cells.

“The fact that cancer cells send out nanoscale tentacles and suck out the mitochondria is a rather surprising finding,” says Shiladitya Sengupta at Harvard Medical School.

He and his colleagues put immune cells and cancer cells from mice in the same dish for 16 hours before taking pictures of their interactions using a microscope. They found that, on average, each cancer cell formed one nanotube with a T-cell, while most of the nanotubes were between 50 and 2000 nanometres wide.

By labelling the mitochondria inside the immune cells with a fluorescent chemical marker, the team discovered that the mitochondria were transferred towards the cancer cells along the nanotubes.

Significantly, cancer cells consumed oxygen at around double the rate and reproduced more often when they were placed in contact with T-cells for 16 hours, compared with a control group of cancer cells that were grown in the presence of T-cells but were physically separated from them.

Meanwhile, T-cells consumed less oxygen and decreased in number when cultured in contact with the cancer cells, suggesting that the loss of mitochondria reduced the immune cells’ ability to survive and grow.

Similar experiments involving human cells from cancers of the thymus and breast found evidence that these mitochondria are transferred along nanotubes, too. The researchers also discovered that a drug that partially reduced nanotube formation between T-cells and cancer cells roughly halved tumour volumes in mice, as well as increasing the density of T-cells in tumours when used alongside a clinically available treatment called PD1 blockade, compared with a control treatment.

But the findings should be verified using more specific tools to block nanotube formation and mitochondrial transfer, as the drug could have other effects that reduced the tumour sizes, says Ming Tan at the China Medical University in Taichung, Taiwan.

Vaccination as the price for taking part in society | Letters