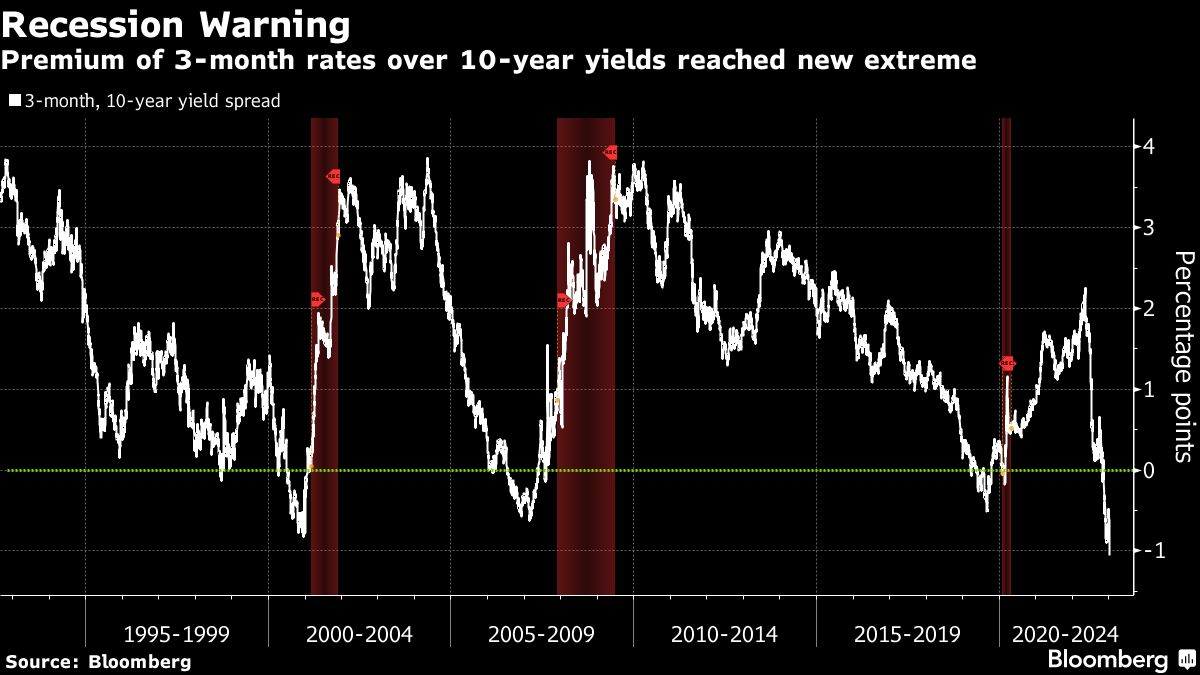 (Bloomberg) — Bond-market bulls are getting an early taste of what they expect to be a winning trade of 2023.

On Friday, shorter-dated Treasuries led a broad market rally after the jobs report for December showed a slowdown in wage growth and a gauge of the service-sector economy unexpectedly shrank. The data stoked speculation that the Federal Reserve is nearing the end of its most aggressive rate-hiking cycle in decades and may start easing monetary policy by year end.

The rally lessened the inversion of key Treasury yield curves — the gaps between shorter- and longer-term rates that are watched closely as potential recession signals. Such moves, referred to in market parlance as a curve steepening, were widely expected to occur this year, providing at least a temporary victory to investors roiled by market volatility.

“The yield-curve steepening we’ve seen post payrolls reflects a sigh of relief that strong wage gains are probably behind us, which is good news for the Fed,” said Alex Li, head of US rates strategy at Credit Agricole. “They’re probably closer to the end of the tightening cycle, though they still have work to do.”

It’s far from certain that the Treasury market’s recent moves will be sustained, given how volatile the market has been, and long yields are still significantly below short ones amid uncertainty about the outlook. Moreover, there remains a large disconnect between the financial markets and Fed officials, who are emphasizing that they are likely to keep raising rates — and hold them there — until inflation draws back toward the central bank’s 2% target.

Priya Misra, head of global rates strategy at TD Securities, said the market is wrong to be pricing in a return to Fed rate cuts. In her view, the Fed is likely to boost its key rate to around 5.5% and keep it there all year, which she said could drive the 10-year yield even deeper below the 2-year benchmark than it was before. The Fed’s rate is currently in a range of 4.25-4.5%.

There’s another risk that could upend bullish bets across the yield curve. If data shows that inflation remains sticky and the economy resilient, Treasury yields may take another leg up as the now-expected easing is priced out of the market.

That’s not what traders have set up for. Both 2-year and 10-year yields — now around 4.25% and 3.56% respectively, are both well below where the Fed funds rate is expected to peak this year. On Friday, yields on Treasuries due from 2 to 5 years tumbled 21 basis points or more, around twice the drop for 30-year yields.

Swap traders are pricing in that the Fed will keep lifting its benchmark rate until it is just under 5% around June before bringing it down to around 4.5% by year’s end.

That view may be tested in the coming week if the December consumer price index shows inflation was faster than expected, with economists forecasting it will be unchanged from the month before. Investors will also be closely listening to public appearances by Fed officials, including Chair Jerome Powell.

“If the economy can handle higher rates and does not roll over once the Fed finishes tightening, then the back end will normalize as recession fears abate,” said Greg Peters, co-chief investment officer of fixed income at PGIM. That “is a possible scenario and no one is talking about it.”

–With assistance from Elizabeth Stanton.

Storm in California leaves over 330,000 without power, more rough weather ahead By Reuters