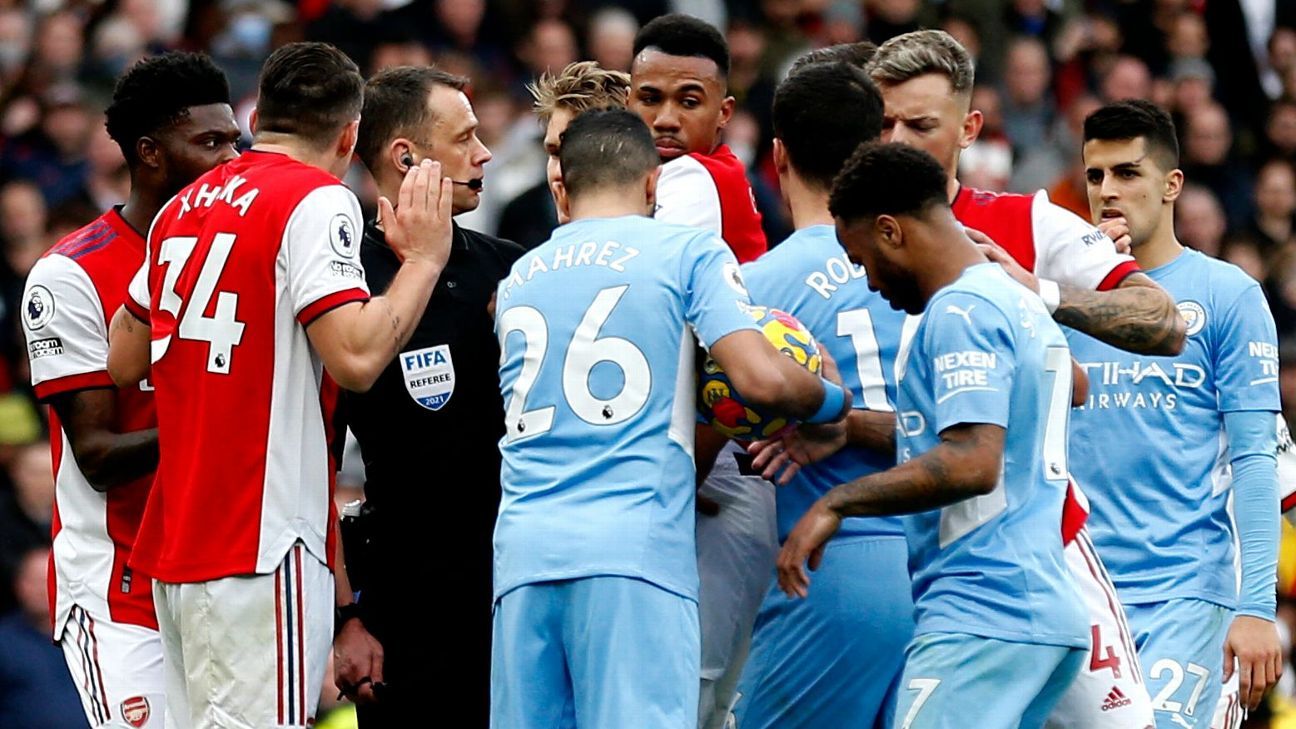 LONDON — The good news for Arsenal manager Mikel Arteta is that a game many felt would be a landslide, a home clash against Premier League champions Manchester City, was in fact effectively decided in two minutes. The bad news is it was an error-strewn spell which underlines that for all the collective progress being made, individual errors remain an unwanted characteristic of his side.

In fairness, some of the mistakes in Saturday’s 2-1 defeat to City were not even theirs. This was a game that will stoke the debate over precisely how VAR (video assistant referee) is used, specifically why referee Stuart Attwell was asked to look at Granit Xhaka‘s second-half challenge on Bernardo Silva at the touchline monitor and not Ederson‘s earlier tackle on Martin Odegaard. Neither were given live by Attwell, but he was asked to reexamine only the second. Both were penalties.

Arsenal were excellent until the 57th minute. Bukayo Saka gave them a deserved lead just after the half-hour mark by finishing a sweeping move that involved Thomas Partey, Xhaka and Odegaard before Kieran Tierney crossed for the England international to side-foot home left-footed from 14 yards.

City looked jaded, bereft of their usual zip in possession as Arsenal imposed themselves impressively. The gap between these two sides has rarely looked smaller. Still, Pep Guardiola’s side have now won 10 consecutive Premier League games against Arsenal by a combined score of 26-3.

So often, the Gunners have appeared resigned to their fate, acquiescing to defeat before kick-off in a manner suggesting an inferiority complex permeates the group. Arteta, currently self-isolating at home after testing positive for COVID-19, is making significant strides in this area, and in that context, the opening hour or so was arguably the most encouraging of his two-year tenure.

But then there were those two minutes. There is little doubt that Bernardo made the most of contact with Xhaka, but the midfielder had no need to pull his shirt after clashing knees. Similarly, Gabriel picked up a needless yellow card for continuing his protest to Attwell after Riyad Mahrez had scored from the penalty spot, which the Arsenal defender had scuffed up moments before.

Arsenal, to their credit, were unchecked in their intent and endeavour, but almost immediately from kick-off, Nathan Ake cleared fellow City defender Aymeric Laporte‘s header off the line straight to Gabriel Martinelli. Eight yards out and with Ederson stranded, Martinelli hit the post. Replays showed Attwell briefly obstructed his view but not enough to explain an awful miss.

From the resulting goal kick, Gabriel took out Gabriel Jesus with the sort of excessive force no defender should apply when on a yellow card, and the Brazilian was duly sent off. So, in the space of 123 seconds, Arsenal had made four individual errors that further swung the game in City’s favour.

“[Gabriel] mentioned to me that [the comment was] about the first penalty moment, about Odegaard and what happened there, no dirty language was used just a comment,” said assistant coach Albert Stuivenberg, in charge for the day with Arteta in touch remotely via a special video feed and separate WhatsApp group call. “It is a moment where young players still have to learn and we have a lot of young players, that is part of the process.”

Nevertheless, City were hardly irresistible with the numerical advantage and relied on a scrappy stoppage-time goal from Rodri to secure their 11th consecutive league win and move 11 points clear at the top of the table. Guardiola cited the extra time Arsenal had to prepare following the postponement of their game against Wolves on Dec. 28.

For the sixth straight year, ESPN presents its annual ranking of the best men’s players and coaches! A collection of Top 10s features No. 1s from six clubs, with 41 new entries and 28 nationalities. Read

“They had six or seven days from Norwich; we had two and a half from Brentford going back to Manchester and coming back,” he told BT Sport. “And we didn’t have energy. That is why we tried to put one more player in midfield, for control.

“We tried in the second half to change it. Football we try to analyse many things — sometimes it is the coin, sometimes it comes down on your side, sometimes the other side. That is the reality. We know what it means to win at the Emirates against Arsenal in the moment they are.”

City appeared to be running on fumes, but there were still plenty of positives for Arsenal here, not least the marked contrast from August’s 5-0 defeat at the Etihad Stadium when the team, admittedly depleted, looked in utter disarray.

“If you compare it to the start of the season, where we come from and where we are now, competing against one of the best teams in the world, we had a lot of chances, prevented them from getting chances, that is something we can build on,” added Stuivenberg.

Arteta is getting plenty right, and he could be back in the dugout for Thursday’s Carabao Cup semifinal first leg against Liverpool (stream LIVE at 2:30 p.m. ET on ESPN+ in the U.S.). Exiled captain Pierre-Emerick Aubameyang was not missed. But to finish where they currently sit, in the top four, two-minute aberrations like the one against City must be eradicated.