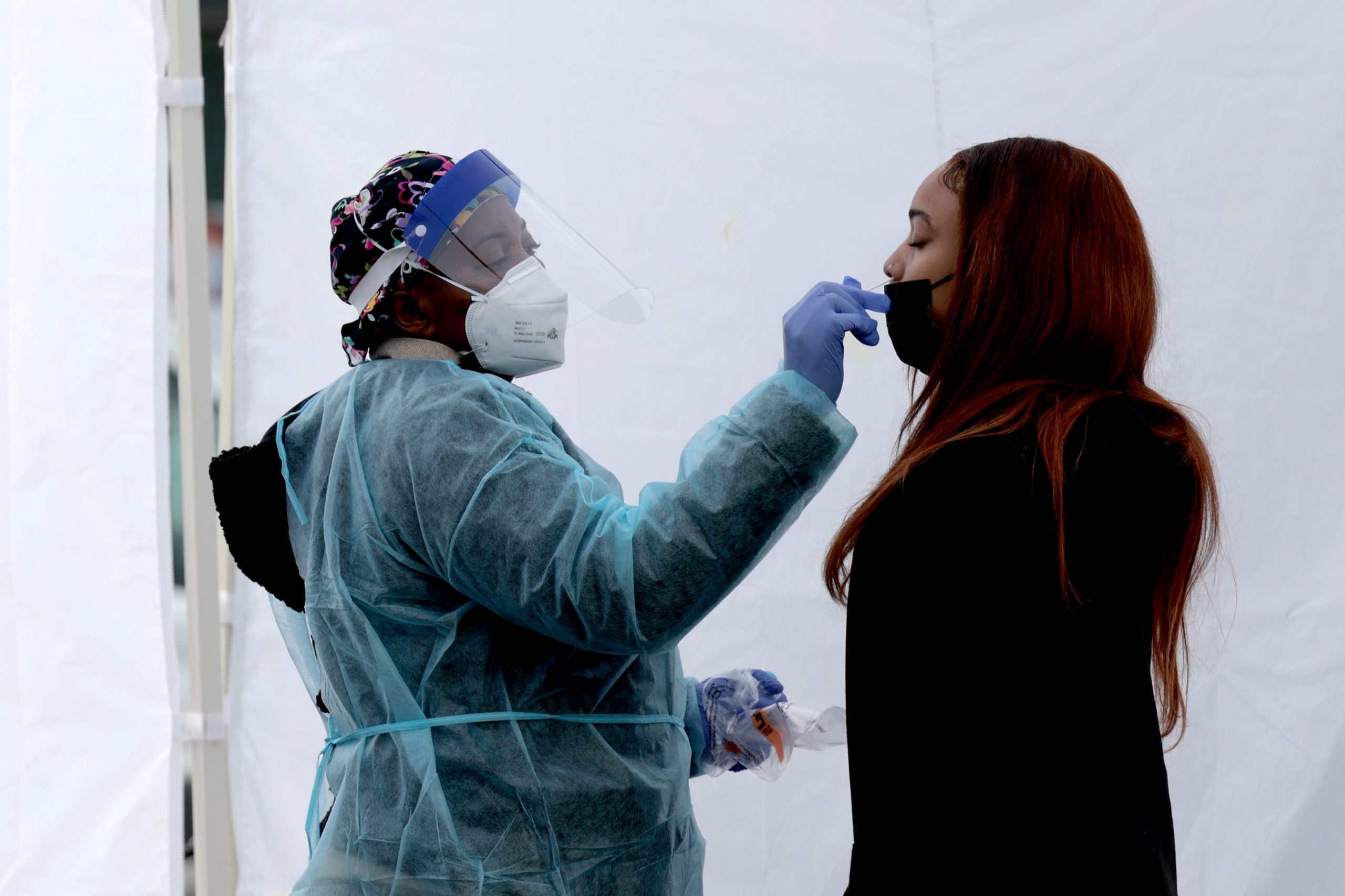 A healthcare worker administers a COVID-19 PCR test at a free test site in Farragut Square on December 28, 2021 in Washington, DC.

A Covid-19 outbreak on a cruise in Lisbon. Thousands of flights canceled. Colleges going remote again.

It’s a new year but the pandemic continues to cause many of the same massive disruptions to American life that it has for almost two years now.

The most recent variant to blame is the omicron strain, which is highly transmissible and more likely to evade the protection of vaccines. Over the last week, a seven-day average of daily new cases of the virus topped 386,000, a doubling from the week prior, according to CNBC analysis of Johns Hopkins University data. Rates are likely even higher because there are delays in reporting over the holidays and an increase in at-home testing that may be keeping cases off the radar of officials.

The surge in new Covid-19 cases means that attempts by businesses and schools to resume normal operation after the holidays are being upended once again.

Companies are pushing back their return-to-work dates as cases peak, including Chevron, Apple, Google and Uber.

Dozens of colleges have announced they’re moving classes online. Harvard University said it would aim to move much of its work and learning remote for at least the first three weeks of January.

“Please know that we do not take this step lightly,” Harvard officials wrote in a letter to staff and students. “It is prompted by the rapid rise in COVID-19 cases locally and across the country.”

Other schools also making the change include The University of Chicago, George Washington University and Columbia University. Many colleges will likely require that students have had their booster vaccine to return in the spring, as breakthrough cases become more common.

Local school districts across the country are also reassessing their plans as well. Some districts are switching back to remote or hybrid learning, while others are trying to lessen the exposure children have to each other by having students attend classes on modified schedule, without a lunch period.

Although New York City, which is the nation’s largest school district, has seen an explosion in Covid cases, the school system will be open as scheduled on Monday. The district is hoping to step up testing efforts to keep instruction in-person. The plan is to double the pace of testing, among both vaccinated and unvaccinated students. Students will be tested even if they don’t display sympton or have a record of having contact with someone who has been sickened by the virus.

One concern is that people will be returning from vacations and visits with family and friends over the holidays, and will have unknowingly been exposed to Covid.

As the rush home get underway, travel has also be upended both by the virus, and by stormy weather, which has grounded some planes.

By Saturday afternoon, more than 2,500 U.S. flights had been canceled, according to tracking service FlightAware. Some of the disruptions are also due to winter storms.

A cruise ship with over 4,000 people aboard has been stopped in Lisbon, Portugal due to a Covid-19 outbreak among crew members, the AP reported on Saturday. The Centers for Disease Control and Prevention said on Thursday that Americans avoid should cruises, regardless of their vaccination status.

– The Associated Press contributed to this report.